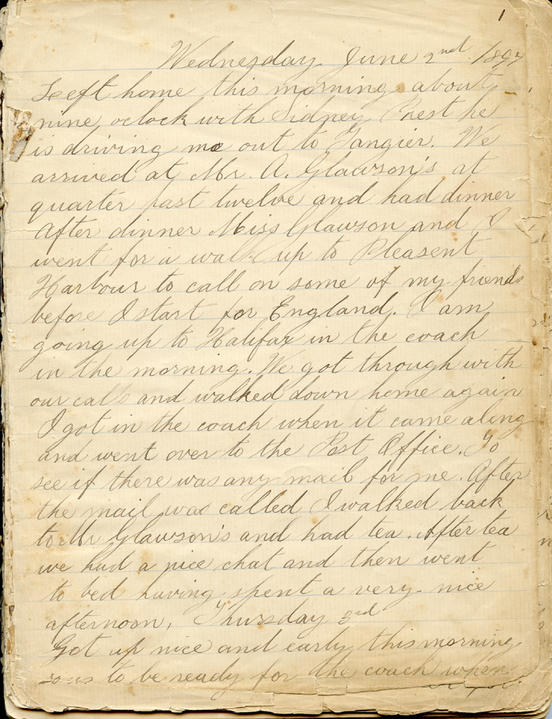 Diary was donated to the Eastern Shore Archives by Marilyn Prest, wife of Bernie Prest who is a descendant of John Martin Prest, adoptive father of Albert White. John Martin Prest was born c. 1831, son of John Martin Prest and Eliza Glawson. He married Jane Amelia Champley on February 4, 1860 in Ship Harbour. Between 1871 and 1881 he lived and worked as a miner at Spry Bay and later farmed at Mooseland. In 1891 he was employed as a farmer and mine owner. He died in November of 1899 at Mooseland. In addition to his adopted son Albert, John Prest had a son and two daughters, Reuben Wellington (1860), Gertrude Mae (1862), Nancy Jane (1869) and also a second adopted son, Charles Donicker (b. 1884).

This diary is a discrete item and is a copy of the diary written by Albert White during the course of a trip to England from June to October of 1897 to visit family and to witness and participate in the celebration of Queen Victoria’s Diamond Jubilee on June 22nd. He sailed from Rimouski on June 6th on the Vancouver and left Liverpool on September 16th on the Scotsman. While most of the diary is related to his visit in England, an account of his journey from Mooseland to Rimouski gives an accurate account of transportation during the late 19th century.

Diary was donated to the Eastern Shore Archives by Marilyn Prest.

The original diary of Albert White is in the possession of Marilyn Prest (wife of Bernie Prest).

The diary is a bound photocopy of the original.