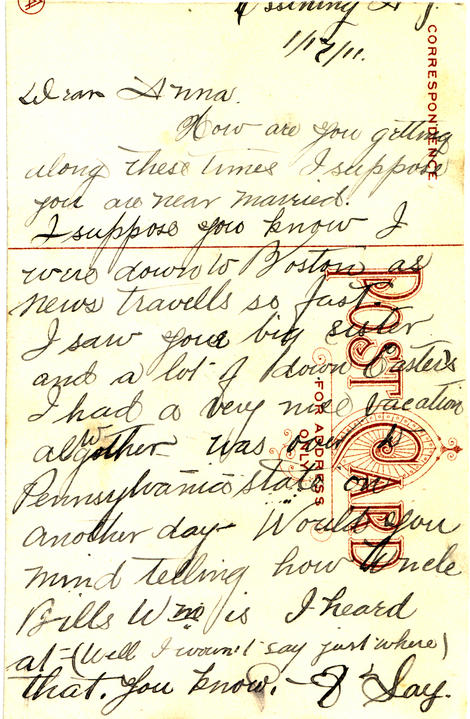 Anna Barbara Webber collected the postcards and put them in two postcard albums, one red album containing postcards addressed to herself, and one brown album containing postcards addressed to her husband William Wilson Webber as well as some to Anna Barbara and other family members. The albums were later passed to the Webbers' daughter Frances (Webber) Robson. After Frances Robson's death in 2004, her niece Lois Miller inherited the postcards. In the summer of 2006, Lois Miller approached Dr. Della Stanley, a professor of Canadian Studies at Mount Saint Vincent University, Halifax, about what to do with the contents of the albums, which were by this time old and crumbling. It was decided that the postcards be removed from the albums, catalogued and placed individually within archival sleeves. The form and content of each card would be described and transcribed, and they would be sorted according to their current arrangement. An effort would also be made to identify the people writing the cards or mentioned in them. The collection would then be presented to the Eastern Shore Archives. The cataloguing, and the creation of the various finding aids, was carried out between September 2006 and August 2007 by Della Stanley and Tiana Parker, a fourth-year Canadian Studies major at Mount Saint Vincent. The collection was transferred by Lois Miller to the Archives in April 2008.

Collection consists of postcards accumulated by Anna Barbara Webber. Postcards date from 1905 to 1914, but predominantly from 1906 to 1912. Most postcards are addressed either to Anna Barbara or to her (then) future husband William Wilson Webber, although there are also some to other family members. Most of the postcards refer to events and activities on the Eastern Shore and in Dartmouth, where Anna Barbara lived during this time period. Postcards are each assigned an individual number from 1 to 696, and are arranged into five categories pertaining to their styles or types: postcards representing specific communities, landscape postcards, photograph postcards, greeting cards, and romance cards. Within each category, cards are arranged in order of their number.

Transferred to the Archives by Lois Miller in April 2008.

Descriptions of individual postcards, including transcriptions of written messages, are available. Two catalogues of descriptions are available, one which reflects the physical arrangement of the cards by category and one which lists the cards in order of their individual numbers. A card catalogue which gives more concise descriptions of each card, arranged by category, is also available. Accompanying the landscape and community cards are indexes listing card numbers by the location represented, and accompanying the greeting cards is an index listing card numbers by type of greeting. Also available is an alphabetical list of initials and abbreviated names which appear in the postcards, which identifies the person's full name and their relationship to Anna Barbara Webber or William Wilson Webber. Lists of the immediate family members of Anna Barbara and William are also available.