Series consists of receipt books for sales and services for Lester D. MacKeen blacksmithing and heating business. Describes types of goods sold and services performed over time within the local area.

Series forms part of Robert Kim Stevens fonds and consists of one original drawing of the Thomas Stevens House in Musquodoboit Harbour, by Joan Flewwelling. The house was originally owned by Robert Stevens, the village blacksmith, who had it built...

The collection consists of two day books--one small softcover; the second a hardbound paper edition. They record the day to day transactions which took place at the Kennedy blacksmith operation at Loch Katrine. Most transactions were for cash, b... 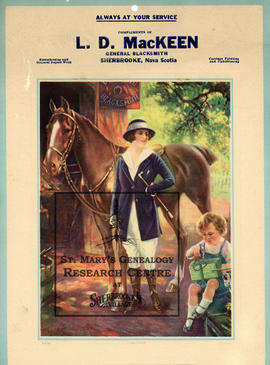 Series forms part of the Grace (Williams) Forsythe fonds and consists of locally produced publications related to the history of communities on the Eastern Shore. Included in the series are two publications on the history of St. James Church and J...