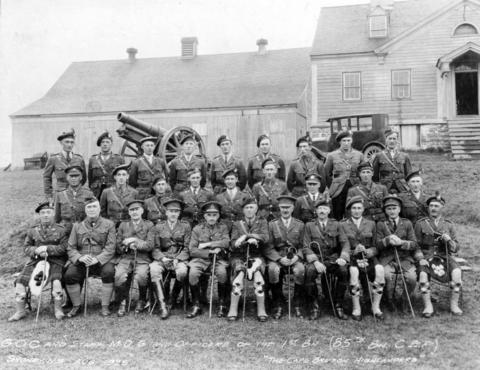 The Cape Breton Highlanders have a long and courageous history dating back to 1871 when they were first formed. The Regiment was then known as the 94th Victoria Regiment, and was stationed at Baddeck, Nova Scotia. Original personel of the Regiment were mostly Scots, who came from the Duke of Argyll's estates in the highlands of Scotland. The 94th became a Regiment in 1879, adopting the sub-title Argyll Highlanders, and wearing their tartan. At that time the Regiment consisted of four companies, and at a later date four more companies were recruited, and continued to be part of the Regiment until the outbreak of World War One. In August 1914 the 94th was called to Active Service, 2400 men were sent to the 85th Battalion, and the 185th Battalion, Cape Breton Highlanders. In 1939 the Cape Breton Highlanders were called to Active Service and after hard training in England joined the campaigns in Italy, the French Riveria and the Netherlands. The Battalion was disbanded in 1946 and the 2nd Battalion then became the Cape Breton Highlanders with headquarters at Victoria Park, Sydney with companies in Sydney, Glace Bay, Sydney Mines, New Waterford and Baddeck.