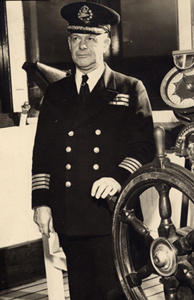 Anaclet LeBlanc was born at West Pubnico, Nova Scotia in 1891, the son of Louis Cyrille à Joseph à Joseph and Melanie LeBlanc (daughter of Joseph LeBlanc and Francoise). He went to sea at an early age as a mate, and later master, of coastal vessels. During World War I he commanded a minesweeper off the coast of eastern Nova Scotia. He went on to serve with the Canadian National Steamships and commanded the Lady Rodney during World War II, which was converted to a troop vessel and carried war brides from mainland Europe to the United Kingdom, and then to North America. Before taking command of the Lady Rodney he commanded the C.N.S. Cathcart, protecting the sealanes of the West Indies. Following the war, the vessel was returned to its luxury liner status. In 1947 he was awarded the key to the City of Boston in recognition of his services. He married Azilda Cuillard of Montmagny, P.Q. and the couple resided at Saint-Michel de Bellechasse, P.Q.

Records were collected by Pere Clarence d'Entremont and donated to the Societe in 1998.

Certificates and letters are fragile and show signs that records have been exposed to mice.

View images from the Capt. Anaclet LeBlanc fonds in the ArchWay Photographic Database.

Also included with donation is the key to the City of Boston, a pocket dictionary, book Glouchester and Cape Ann, booklet Ship Models, and booklet Rigs of the Nine Principal Types of American Sailing Vessels.