Item is a parchment certificate admitting and enrolling James Thomson as an attorney and barrister of the Supreme Court of Nova Scotia, sealed and signed by Brenton Halliburton, Chief Justice of Nova Scotia.

Item is a certificate by William Wilfred Sullivan, Notary Public, on behalf of George Stewart appointing Reverend John Moffatt as executor of the estate of the Reverend George W. Stewart, Charlottetown, P.E.I.

Series forms part of F. Mitchell, Hosking family fonds and consists of four certificates including two presented to William Hosking, one given to Garth Hosking, and a voter registration certificate belonging to Mildred Hosking. 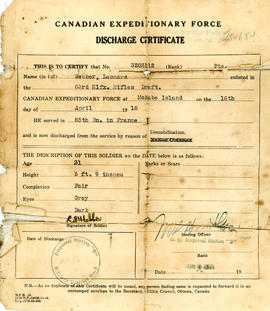