The Challenge to leadership 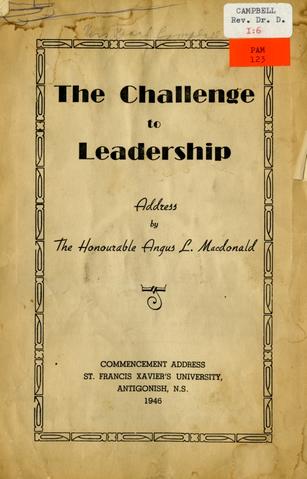 The Challenge to leadership

Angus Lewis Macdonald was born at Dunvegan, N.S. on 10 August 1890, the son of Lewis and Veronica (Perry) Macdonald. He was educated at Port Hood Academy, Saint Frances Xavier University (BA), Dalhousie University (LLB) and Harvard University (SJD). After serving overseas in World War One, he taught and practiced law in Halifax. Elected as a Liberal for Halifax South to the Nova Scotia Assembly in 1933, he was sworn in as premier and provincial secretary on 5 September 1933. He resigned in 1940 to become minister of national defence for naval services and was elected to the House of Commons for Kingston, Ont. In 1945 he resigned from the federal cabinet and resumed the premiership of Nova Scotia. He died in office on 13 April 1954. His wife was Agnes Foley; they were married at Halifax on 24 June 1924.

Item is the commencement address given by Angus MacDonald at St. Francis Xavier University in Antigonish, N.S. in 1946.