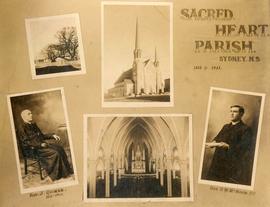 Item is a photographic collage of five photographs featuring the glebe, the exterior and interior of the church, Reverend J. Quiman and Reverend D. M. McAdam.

Item is an aerial photograph of the Roman Catholic Church in Main-à-Dieu taken shortly before it was destroyed in a forest fire in January 1976. The parish hall was destroyed by fire in April, 1977.