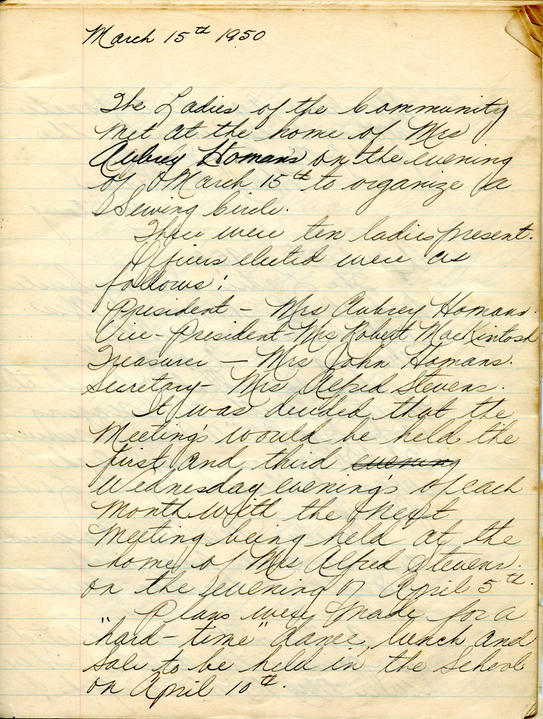 The Clam Harbour Ladies Sewing Circle was likely formed around March, 1950. If this is the case, Mrs. Aubrey (Eliza Harvey) Homans was the first president and held the position from 1950 to 1952 at which time she was succeeded by Mrs. James Stevens. Mrs. Robert MacKintosh served as Vice President from 1950 to 1952 and then served jointly with Mrs. Aubrey Homans. Muriel Stevens (Mrs. Alfred Stevens) served as secretary from 1950 to 1952 and the entire contents of the book were recorded by her except for several meetings when she was absent. She was succeeded as secretary by Mrs. Roy (Laura Stoddard) Sanford. Mrs. John Homans remained treasurer throughout and was re-elected in 1952.

The item was donated to the Eastern Shore Archives by Robert Cook. His grandmother was Lola (Stoddard) Fogo. She was the daughter of Hannah Palmer and Walter Edward Stoddard, and sister of Laura F. (Stoddard) Sanford. She was born in the old Stoddard Hotel and owned the house that was built by Fanning Stoddard c. 1810 and located between the beach and the old Stoddard Hotel. She owned the property from the late 1940s to the late 1960s when she passed away. The house was later destroyed by arson in 1994. Lola was a seasonal resident of Clam Harbour during the years that she owned the house, spending her winters in Montreal at the home of Robert Cook’s parents. She was actively engaged in the community, attended the church, and was a member of the sewing circle. Robert found the sewing circle minute book among some of her personal possessions that had been stored [at his parents’ home]. Fortunately, it had been removed from the house in Clam Harbour prior to the fire.

Item consists of one book containing handwritten minutes of the Clam Harbour Ladies Sewing Circle recorded by secretary, Muriel Stevens from 1950 to 1952. Opening pages seem to suggest that the sewing circle was just being formed on March 15, 1950. Minutes record where the meetings were held, members in attendance, election of officials, plans for and outcomes of fundraisers, records of donations, and work done for the Church and Manse both by the Sewing Circle independently and in collaboration with other groups such as the Musquodoboit Harbour Ladies Aid Society. The book also contains an attendance list in the back that includes the names of all the Sewing Circle members.

The item was donated to the Eastern Shore Archives by Robert Cook.

Item was part of a donation that included a Presto Pressure Cooker that has been catalogued separately as an artefact.