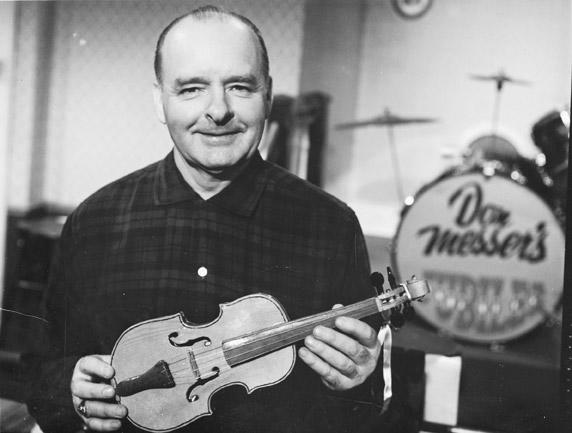 9.02 m of textual records and other material

Donald Charles Frederick Messer, fiddler, music director and music writer, was born in Tweedside, N.B., 9 May 1909. Educated in New Brunswick, Messer studied violin in Boston, Mass. Messer began his career as a professional musician by playing in bands for dances and by 1929 was performing on radio CFBO, Saint John, N.B. By 1934 his band, the New Brunswick Lumberjacks, was being broadcast from CHSJ, Saint John. In 1938 Messer took part of his group to Charlottetown and formed Don Messer and the Islanders, later called Don Messer and His Islanders, heard nationally three times a week on CBC radio (from CFCY Charlottetown, PEI) between 1944 to 1958. The group also recorded for the record labels Apex, MCA, Rodeo and its affiliates; by 1952 it had released over sixty audio discs, 78 rpms and LPs. The group was featured on CBC television in Halifax on the Don Messer Show, later called Don Messer's Jubilee, from 1959 to 1969, becoming the most popular old-time musical group in Canada in the mid-twentieth century. Messer's group also periodically toured parts of Canada, including Festival Canada's centennial trip in 1967, which lasted three months and included sixty-one centres. After cancellation of Don Messer's Jubilee in 1969, a syndicated version was broadcast from CHCH-TV Hamilton. Messer died 26 March 1973 in Halifax.

Fonds was held on deposit at the Public Archives of Nova Scotia for twenty-five years before it was formally donated in 1999.

Fonds consists of textual records, sound recordings and photographs, created and accumulated by Messer during the course of his career from the 1920s until his death. In addition to documenting Messer's career, the fonds also contains a major music library documenting the musical tradition of rural North America, as Messer actively acquired musical scores and recordings from musicians, composers and folklorists throughout North America and Europe. Also includes one film.

Donor retains all copyright and reproduction and distribution rights to material created and authored by Don Messer. Works created by other parties might be subject to restrictions under the Copyright Act.