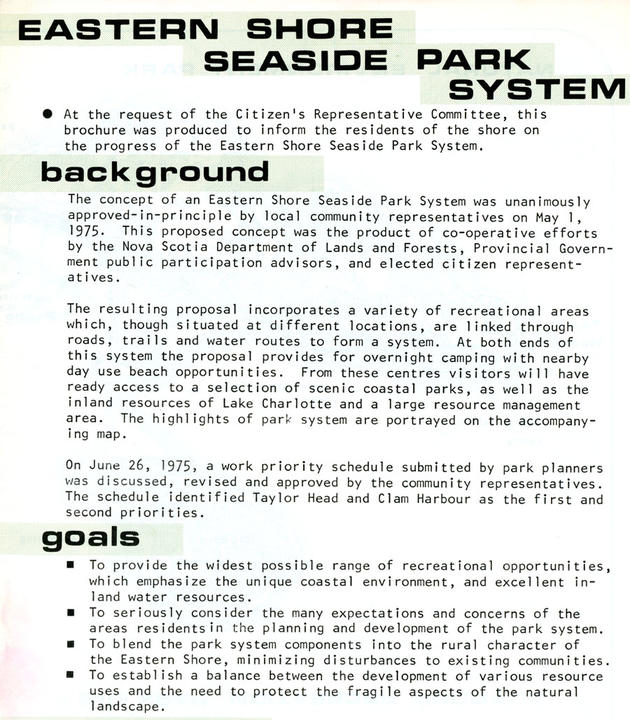 The Eastern Shore Seaside Park System Citizen’s Representative Committee was formed in February 1975, following the Nova Scotia government’s announcement of plans to develop the Eastern Shore Seaside Park System. The Minister of Nova Scotia’s Department of Lands and Forests declared that his department wanted to actively encourage public participation in the planning of the proposed provincial Park System, following an earlier proposal for a Ship Harbour National Park in approximately the same area which had been abandoned, mainly due to local opposition. The Minister created the Citizen’s Representative Committee in order to act as a liaison between the public and provincial park planners, with “authority to conduct public meetings to receive and use technical data from the department offices and to keep the Minister informed of any concerns and recommendations from area residents”. The Committee was comprised of 21 locally elected members representing 17 communities from Musquodoboit Harbour to Sheet Harbour. Soon after its formation, the Committee decided on its own objectives, which were to “get more information” for the people they represented; to carry to the provincial authorities the concerns of the people; to evaluate the park proposal and make recommendations; to learn how their efforts would be recognized by the government; to submit questions and concerns to provincial authorities “not simply at the meetings of the representatives but also at any time”; to invite the Minister of Lands and Forests to Committee meetings when appropriate; and to keep ongoing communications between the public and itself “through mail, press releases, paper and radio”. The Committee actively pursued these objectives from the spring of 1975 through the official opening of the Park System in August 1981, and into the fall of 1981. The Committee’s Chairman was Gordon Hammond from 1975 until 1981, and Lantz Siteman from 1981 until the Committee ceased its activities in the early or mid-1980s.

Whenever possible, records were arranged in the order in which they were found in their original containers.

An historical inventory of the Eastern Shore Seaside Park System is included in the Kathy Moggridge Kuusisto fonds, located at Nova Scotia Archives and Records Management in Halifax.

When appropriate, some publications were cataloged in the Research Module and made available in the Reading Room of the Archives, while other publications and documents were weeded and disposed of. Records donated by Lantz Siteman were originally accessioned with the number 2006.011, but were re-accessioned with the number 2009.034 at the time of cataloging.