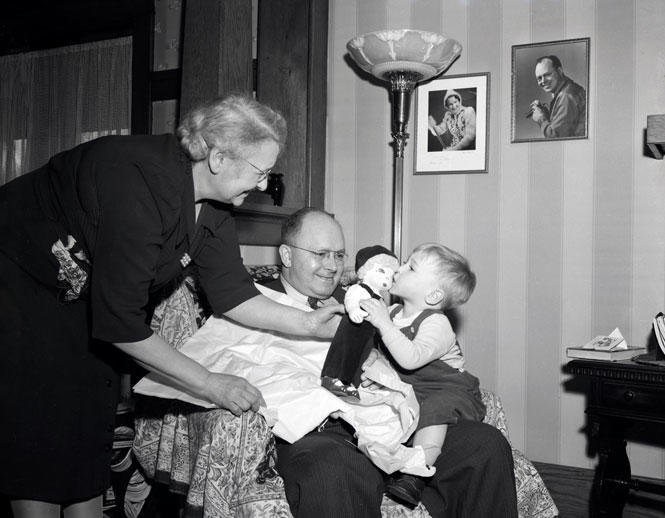 Professional photographer and filmmaker Edward Arthur Bollinger, son of Edward and Nelllie Bollinger, was born 6 September 1909 at Buffalo, N.Y. He graduated from the Buffalo School of Fine Arts and taught art in the public schools from 1927 to 1939. While in Buffalo he met artist Esther Baker, of Melvern Square, Annapolis Co., N.S., whom he married on 15 July 1933. Bollinger spent several summers in Nova Scotia before moving to Halifax where he opened The Camera Shop on Blowers Street with his brother-in-law Reid Sweet in June 1939. In 1941, Bollinger returned to the U.S. and worked for the Motion Picture Division of Bell Aircraft Corp. In 1947 Reid Sweet opened his own business and Bollinger's Camera Shop became the Camera Shop of the Maritimes which he operated until 1974. In addition to photographic services, he ran a small animation studio where he produced sports films for the Canadian Broadcasting Corporation, commercials for various businesses, and films for the Nova Scotia government. Bollinger was also a founding member of the Camera Obscurists Club and the Color Photographic Guild of the Maritimes. Following the sale of his business, Bollinger retired to Satellite Beach, Fla. where he ran a photo equipment servicing business for several years. He died there on 20 March 2001.

Fonds consists of negatives taken by Bollinger for his clients while operating The Camera Shop and later Camera Shop of the Maritimes. Subjects include exterior and interior views of businesses in Halifax such as Imperial Oil and Royal Bank and its employees, Victoria General Hospital staff and facilities, societies, churches, hotels, storefronts, Halifax shipyards, naval personnel and events, CHNS radio station events, and wartime housing. Also contains scenes of rural Nova Scotia including the South Shore, Annapolis Valley, and Cape Breton. There are also a small number of personal photographs of Bollinger's family including son Wynn, friends, and social events. The fonds also contains film footage taken by Bollinger while visiting Nova Scotia in the summer of 1934. Images include Halifax Public Gardens and a trip to Isle Haute, Peggy's Cove, "Evangeline" area, re-enactment of Champlain's landing at Port Royal, and the Nova Scotia Guides Meets held at Lake William.

Bollinger donated his negatives in 1975 and his films in 1986. The Terence Bay film was transferred to NS Archives in 2010 by the Nova Scotia Museum.

Fonds contains several unidentified, unnumbered negatives. Other negatives that were numbered in sequence by the donor are missing.

Other Edward A. Bollinger films may be found in various Nova Scotia government department fonds such as Department of Lands and Forests.
Several Bollinger photographs are found in the CHNS fonds.