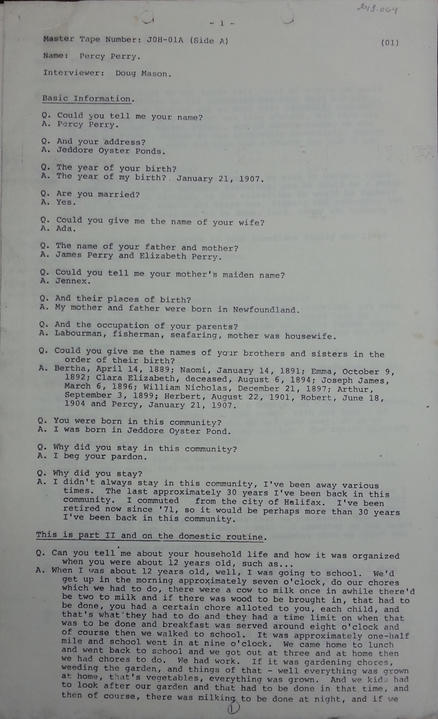 The Nova Scotia Museum is one of the oldest provincial museums in Canada. It was first established in 1868 and includes twenty-eight museums. Its mandate includes collecting, researching, and documenting the natural and human history of Nova Scotia.

The tapes and transcripts of the interviews were housed at the collections unit of the Nova Scotia Museum following the completion of the project. Copies of some, not all, of the interview transcripts, were given to Ford Webber in the later 1990s and he in turn donated them to the Eastern Shore Archives at a later date.

The Fisherman’s Life Museum is located in Oyster Pond and depicts the home and lifestyle of a local inshore fisherman in the early 1900s. It was originally the home of Ervine and Ethelda Myers and their family. It is part of the Nova Scotia Museum.

The Fisherman’s Life Museum Oral History Project began in the summer of 1981 and was led by Deborah Trask. Interviews were conducted in July and August of that year and transcriptions were completed over the following six years. The primary motive for conducting the interviews was to gather information that would assist with interpretive program development for the new Fisherman's Life museum and to ensure the accuracy of the museum’s furnishings. The interviews were conducted with local residents who had substantial knowledge of the patterns of life in the area and would enable the museum to collect a wealth of oral history related to the Ervine Myers house, the museum outbuildings and site, patterns of land usage, work, and life in the community.

Collection consists of transcripts and in some cases, audio cassette recordings of interviews with various residents of the Jeddore Oyster Pond area including Olive (Parker) Robbins, Percy Perry, Garth M. Hosking, Cecil F. Mitchell, and Jeannette A. (Mitchell) Hartlen. The interviews contain information regarding local history, the life of inshore fishermen in the area in the late 1800s to early 1900s, and information regarding the buildings and site that are now part of the Fisherman’s Life Museum. Collection also includes transcripts of the interviews.