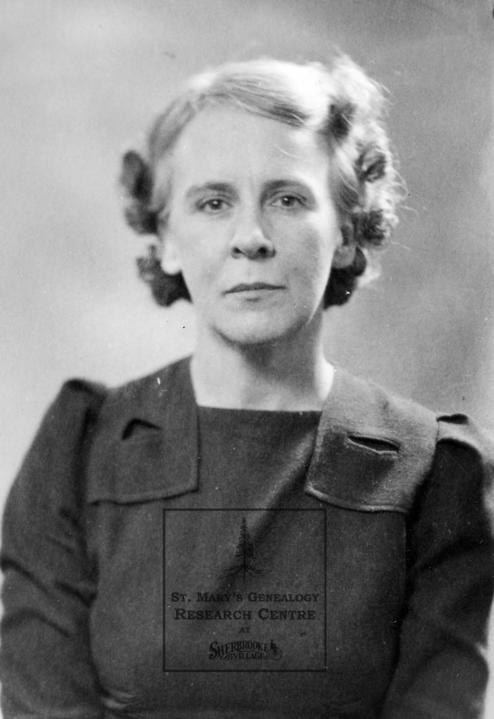 Florence Margaret MacDonald was born 21 September 1895 in Sherbrooke, Guysborough Co., Nova Scotia, one of three surviving children born to James Wm. MacDonald and Margaret Jane (Hattie) MacDonald. Her father ran a leather and harness making shop on Main Street, Sherbrooke, and her grandfather was Donald MacDonald, a tailor whose shop is now part of Sherbrooke Village Restoration. She was educated in Sherbrooke, and also completed courses at the Halifax Conservatory of Music and the Maritime Business College. Florence lived in Sherbrooke most of her life, but worked in Ottawa within the federal treasury department before returning home in 1946 to accept the position of accountant in the office of the Municipality of the District of St. Mary's. In 1949 she resigned the position because of the illness of her mother. In 1952, she joined the staff of the Nova Scotia Federation of Home and School as provincial treasurer, based in Truro. She returned to Sherbrooke in 1956 to resume her duties as municipal accountant, and in January of 1957 she received the appointment of municipal clerk and deputy treasurer for the Municipality of the District of St. Mary's, a position she held until 1967. She also worked as the assistant secretary-treasurer for the St. Mary's Municipal School Board. Florence MacDonald was active in a number of community organizations, including St. John's United Church, Sherbrooke, where she was church organist for many years and a member of the United Church Women (UCW). She was also a member of the Florence Fraser Chapter No. 47 of the Order of the Eastern Star, where she served as worthy matron, the Women's Institute, the Sherbrooke Street and Light Commission, the local hospital board, the Sunlight Rebekah Lodge #110, and the St. Mary's Historical Society. She died 24 May 1983.

Fonds consist of records created and accumulated by Florence M. MacDonald relating to her personal life and three generations of the Donald MacDonald family of Sherbrooke, Guysborough County. Included are a Gaelic language Bible (1867) belonging to Donald MacDonald; a cookbook (1879) interleaved with handwritten family recipes and recipe clippings belonging to Mrs. Donald MacDonald; and records relating to James Wm. MacDonald, Murray MacDonald, and John Geddie MacDonald. Also included are MacDonald family portraits and two photograph albums, one of Florence MacDonald and friends in Sherbrooke and Halifax, and another of lumbering, hunting, and fishing along the St. Mary's River; Province of Nova Scotia Department of Agriculture Domestic Science Bulletin No. 1, Women's Institute Division, The Cooking and Canning of Vegetables (1916); community newspaper clippings and obituaries; personal files and correspondence; and genealogy research and correspondence relating to the MacDonald and Sutherland families of St. Mary's. Also included are originals and copied b&w photographs and negatives used or considered as part of Florence MacDonald's book "Sherbrooke as I Remember It," published in 1987.

Fonds is arranged in the following series: 1) Genealogy and Family History, 2) Newspaper Clippings and Obituaries, 3) Photographs, 4) Personal Correspondence, Files, and Certificates, and 5) Sherbrooke As I Remember It Files and Photographs