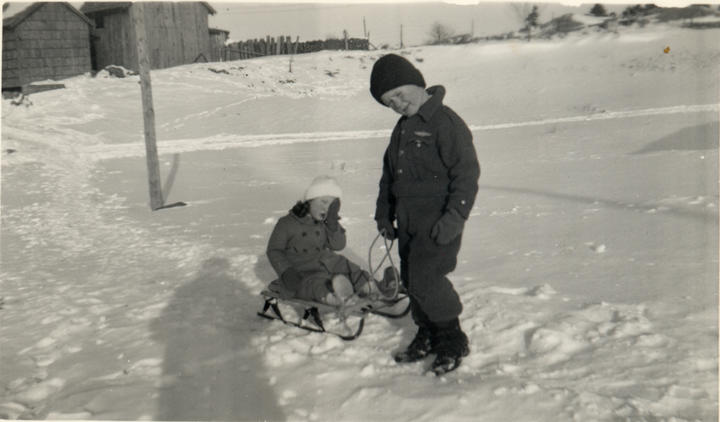 Ford Hanscom Webber was born on September 30, 1937 in Lake Charlotte, Halifax County, Nova Scotia to parents Edward James “Ned” Webber (1897-1963) and Marguerite Lillias “Babe” Grant (1907-1971). His father owned and operated Webber's Store in Lake Charlotte and as a child Ford helped out at the store while also attending the local one-room schoolhouse. At the age of fifteen, he left Lake Charlotte to attend the Halifax County Vocational High School, where he studied carpentry and stayed with his aunt Gertrude Stretch in Dartmouth. He graduated from vocational school at the age of eighteen and continued to attend night school for two years in Halifax. He then took a six-week finishing course in Sydney, graduating with full carpentry certification at the age of twenty-one.

Ford Webber spent his first summer after graduation as a carpenter in Halifax, before moving back to the Eastern Shore to help complete the construction of Robert Jamieson Memorial Consolidated High School in Oyster Pond. Thereafter, he was self-employed, working on a variety of construction projects on the Eastern Shore, including maintenance work for the County Schoolboard, pallet construction for Moirs, and constructing and repairing local bridges. During this time, Ford employed numerous workers. He married Joyce Anthony, daughter of Edward ‘Ted’ and Maud Anthony, and together they had two sons, Anthony and Timothy. He and Joyce later divorced and he married Marguerite ‘Peggy’ Sweet, daughter of Joan (Stevens) and Elliot Whyman Sweet. In 1964, Ford joined in a construction venture called Dolphin Industries, located in Musquodoboit Harbour and specializing in manufacturing as well as in concrete fabrication. One of the items produced were wooden sleds, which were shipped by rail and sold across Canada. Together with his mother, he had assumed management of Webber's Store after the death of his father in 1963, and continued running it until his mother’s death in 1971. The store was then operated by the company, E. J. Webber’s Store and owned jointly by the children of Ned and Babe. Ford retired from management of the store in 2004.

Throughout his lifetime, Ford’s father collected examples of changing technology and equipment in the hopes of someday creating a display or attraction for the visitors coming to Lake Charlotte. Ford shared his father’s interest and continued his father’s practice of preserving objects that others were throwing away, over time amassing a collection of artefacts and records. In 1994, along with other community members, he began to plan how this collection could be displayed. This led to the founding of the Lake Charlotte Area Heritage Society in 1995. The Society modified and expanded his proposal into Memory Lane Heritage Village, which opened in 2000 and was completed in 2003, with Ford playing an important role throughout. Ford Webber remained active in the Village and Society’s activities until his death on July 31, 2008.

Records were created and accumulated by Ford Webber and donated to the Eastern Shore Archives in 2008 and 2012 by his second wife, Marguerite ‘Peggy’ (Sweet) Webber.

Some books in the books and guides series are missing covers and have loose pages.

Records were donated to the Eastern Shore Archives by Ford Webber and Peggy (Sweet) Webber.

Published material that was not relevant to the mandate of the archives was weeded as well as exercise books that did not contain any relevant information.

Records in the Webbers Shore News series are arranged in reverse chronological order.

Some books were catalogued as artefacts to be used in the Memory Lane school house. These consisted of a copy of The Adventures of Bob White by Thornton W. Burgess, and a copy of Edgar Allen Poe's, The Raven and The Bells.