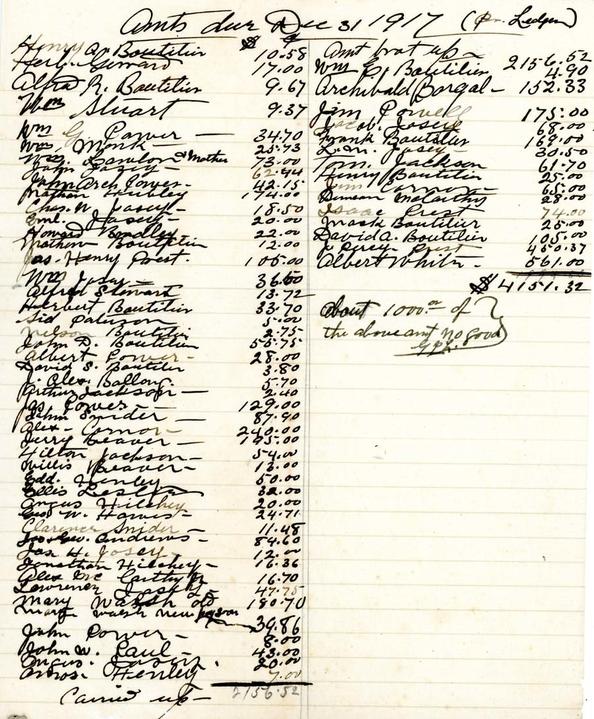 The Leslie family of Spry Bay operated a number of general merchandise and produce businesses between the early 1900s and 1969 when the last gas was sold and when the store closed. At the time of its closure it was owned by Robert L. Leslie.
Gasper James Leslie (1862-1930) was born in Spry Bay to parents John Charles Leslie (b. 1834) and Maria Cooper (b. 1835). He married Jane Warren (1862-1912) and was an Anglican merchant in Spry Bay as well as post master. His second wife was Harriet Jane [?]. He had three children: Robert, James Edward, and Marie Marguerite.
Robert Anthony Campbell Leslie (1892-1977) was the son of married Marion Alberta Boutilier (1906-2001) and they had a son, Robert L. Leslie (b. 1936). Robert A. C. Leslie took over operation of his father's store, known simply as "Leslie's Store," in Spry Bay when his uncle passed away in 1944 although he likely worked at the store prior to his uncle's death, as he is listed as a merchant on his marriage record in 1932. His uncle had taken over the store when Robert's father passed away. Robert A. C. Leslie and his wife are buried at St James' Anglican cemetery in Spry Bay.
Robert L. Leslie was born ca. 1936 in Spry Bay. His grandfather operated the general merchandise store, simply referred to as "Leslie's Store," which passed onto his grandfather's brother upon his death. When Robert's great uncle passed away in 1944, the business was left to Robert's father, who operated it for many years. Robert's mother also helped run the store and the post office, which also operated out of the store. The mail was delivered to the store by horse and wagon or sleigh in the early years.
The store was located in the front of the Leslie family home and they sold everything. There was a small box stove for heat. They didn't have a cash register, they used a cigar box for the money and then later a metal cash box. Robert began helping his father in the store as soon as he was old enough to make change and they sold many supplies to local fishermen including nets and rope, and a lot of hardware supplies and nails for horseshoes. They also sold household items, flour, wheat, cattle and pig feed, seed, clothing, and fabric on rolls that was cut and sold by the yard. They did not sell bread or milk when Robert was young, as most people had their own cow and would make their own bread. They began selling glass-bottled milk in the late 1950s or early 1960s. They also sold kerosene for lamps and had one ten gallon tank gas pump, although in early years there were few cars in Spry Bay. Some of their most popular items were tobacco and clothing, including overalls, mackinaws (heavy jumpers for winter), and lumbermen rubbers (short boots that came just above the ankle) and taller rubber boots with leather tops.
The Leslies purchased items from a variety of suppliers including John Tobin in Halifax, Halifax Seed, Boland's for groceries, Christie's biscuits, and Harris and Roome for hardware supplies. A salesman also came around about every two weeks or so and in the fall a truck delivered apples and other produce from the Annapolis Valley. During the war years freight came by boat from Halifax, there were not many trucks on the roads. Ernie MacKenzie had a freight boat but replaced it with a truck and eventually came to have four or five. Another fellow named Horseman also delivered by truck and there was still a freight boat when these trucks were in operation. The freight boats were about 45- 60 ft. long and brought flour, feed, and puncheons of molasses (about 100 gallons each). The barrels or molasses would be stored in a shed near the store and tapped and portions would be poured out for customers upon request, using one gallon glass jars or pails that the customers brought with them.
The store never closed for mealtimes and if you heard a customer come in while you were at the table, you left to tend to them. In the evenings, any time of the year, people would drop in for something and would often sit on the tea crate inside the door and tell stories and talk about the day's happenings. Rationing occurred during the war years, but had little impact on the business of the store. In 1946 the Leslie family got electricity and about three or four years later they got the first ice cream freezer in the store, which was a special treat. The ice cream was supplied by Maple Leaf Dairy in Halifax, and Polar Ice Cream, and then Farmer's Dairy.

Records were given to George Newbury by Siobhan Nelson, who purchased the books from a antique book store in Lunenburg, Nova Scotia. George donated the books to the Eastern Shore Archives in 2008.

Large ledgers are in good condition, but delicate.

Donated by George Newbury in 2008.