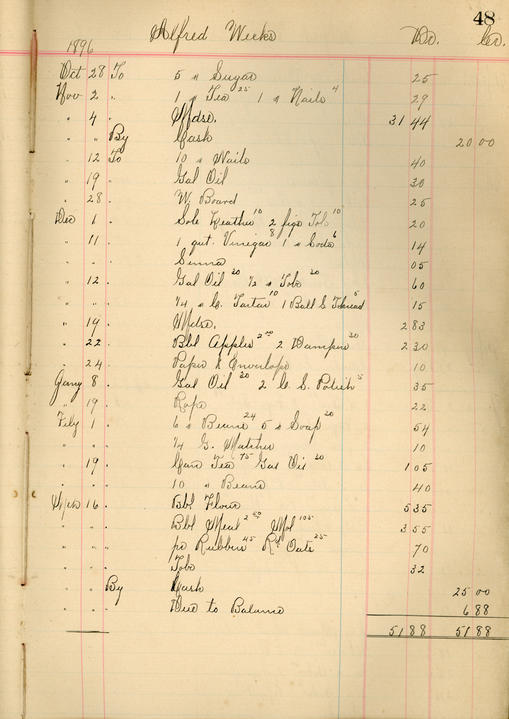 George Lewis Monk was born December 17, 1876 in Ship Harbour, Nova Scotia. He was the son of lumberman James Richard Monk and Sabina (Weeks) Monk. As a young man he worked for Hill & French Lumber Company in Ship Harbour and subsequently opened his own store in Ship Harbour around 1896. The Marine Highway Historical Society’s compilation, The Gull’s Cry, references an 1899 news article mentioning George Monk as clearing away a site for a new store. He married Mary Edith Robertson on January 2, 1901 at Christ Church in Dartmouth and together they had a daughter, Marcia, in 1903. In addition to a general store, George L. Monk also operated three lumber camps, a mill, and a cookhouse. In the 1930s and 1940s, when there was a demand for pulpwood, he sold pulp to various foreign buyers including the United States, Germany, and Norway. He worked as a lumber and general merchant for over fifty years, however, business declined after the war and the store was closed in the early 1950s. George L. Monk died January 24, 1959 and is buried at St. Stephen’s cemetery, Ship Harbour.

The records of George L. Monk were donated to Dalhousie University Archives and Special Collections by his grandson, Edward Hollingum, in 1973. They were transferred to the Eastern Shore Archives on February 16, 2012.

Fonds consists of records related to the business operations of George L. Monk, including both wholesale and retail activities. Records include receipts and invoices from business transactions with primarily Halifax-based wholesalers as well as correspondence and three account books.

The leather and cardboard covers of the three extant ledgers, as well as their endpapers, were mouldy, and thus removed and discarded when the material was processed and re-housed.