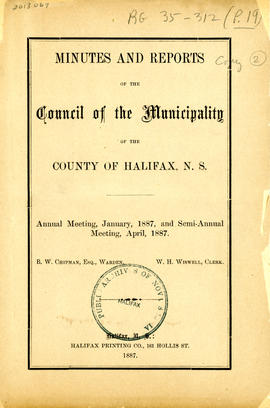 Council of the Municipality of the County of Halifax fonds

Includes seven copies of the minutes and reports of the annual and semi-annual meetings of the Council of the Municipality of the County of Halifax, including the years 1882-1887 and 1889.

Fonds consists of minutes, financial and legal records, reports, attendence, membership and other materials originating in the Dartmouth Lakes Area.

Sub-series contains documents relating to the settling of estates in files opened at the Halifax County is County Registry of Probate from 1750 to 1930. Documents include original wills, petitions for probate or administration, oaths taken and bo...

Fonds consists of minutes, correspondence, reports, registrations, and other materials created in the Halifax Area. The Halifax Camp Committee records are also housed in this fonds.

Series contains records relating to the disposition of property of deceased persons in Halifax County as administered through the Court of Probate. Series consists of two sub-series of records: Wills recorded at Halifax County registry of deeds 17...