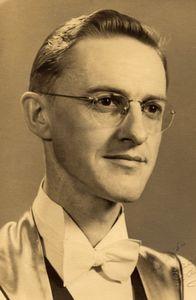 Hector B. d'Entremont was born in West Pubnico on March 21, 1918 to James Gilbert (Jim à Nicholas) and Hélène Elisabeth-Anne d'Entremont (Eliza-Anne). In 1941 he obtained his BA at St. Anne's University in Church Point, NS. Later that same year he enlisted in the Canadian Air Force until 1946. In the autumn of 1946, he enrolled in St. Francis Xavier University, Antigonish, NS, and later finished his studies at the Technical College in Halifax where he graduated as a civil engineer. He was employed by the Nova Scotia Power Corporation. He married Elise d'Eon (à John E.) and had 4 children - Jocelin, Josette, Nathan, and Jean-Pierre. He was a brother to Père Clarence. He was a member of the Royal Canadian Legion, branch 66, Knights of Columbus, West Pubnico, and St. Peter's Church choir and of Les Chanteurs de la Baronnie. He has published a book entitled "Église Saint-Pierre de Pubnico-Ouest, Nouvelle-Écosse-notes Personnelles de Hector B. d'Entremont. Hector died on October 22, 1987, the same day his book was released.
The first section of the Long Wharf (Grand Quai, Government Wharf) was constructed with earth in 1885-6. The following year a second part of wood was constructed to make the Long Wharf a total of 666 feet (203 meters) long. The wooden part of the wharf was demolished in 1955 by hurricane Edna, and then most of what was left of the wharf was demolished by cutting the posts.

H. Leander d'Entremont willed his collection to the Parish of West Pubnico, who in turn donated the documents to the archives in 2001. Some of the documents were received from the Chancellery of Yarmouth. Records were also given by Elise d'Entremont, Hector's wife, in 2010.

The fonds consist of textual records and photographs.

Arrangement has been imposed by the archives.

Related records can be found in Pere Clarence d'Entremont fonds in the files entitled Monument and Histoire Religieuse.