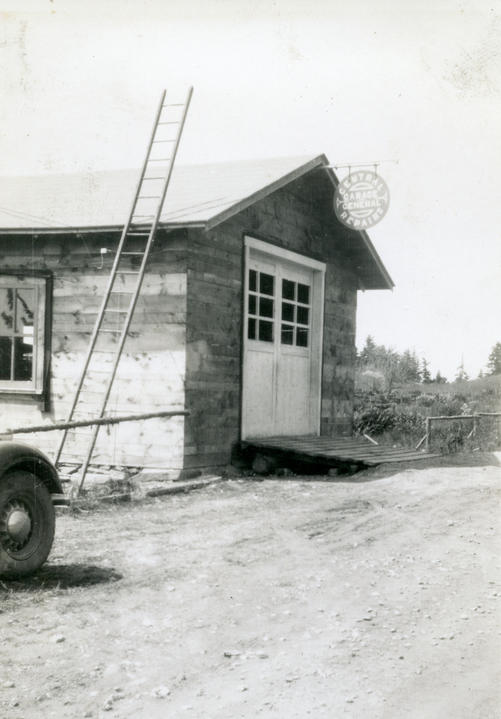 Hosking’s Garage, Oyster Pond, Halifax County, Nova Scotia was opened in the late 1930s by Garth Hosking (1912-1994). In its initial years the garage may have been called the Central Garage, but by 1946 it was clearly called Hosking’s Garage. Hosking was a licensed mechanic and also sold gas via a set of Superline pumps. Oirginally, the garage was located not far down the road from the general store run by Hosking’s uncle, William Moses Ogle “Willie O” Mitchell (1881-1949), which also sold gas via hand cranked pumps. Mitchell phased the gas pumps out after Hosking's Garage opened. The garage was later moved to its current site as Siteman's Garage on the main road, Highway 7. After Mitchell’s death, his store was taken over by Hosking and his wife Mildred (Roberts) Hosking and renamed the Hosking General Store. With the exception of a few years during the Second World War, Hosking's Garage continued to operate until the early 1950s, when Hosking went to work for Dartmouth automobile dealer Teasdale & Foote.

Receipt books remained in the custody of the Mitchell/Hosking family and were located in the warehouse section of the Hosking General Store until the store was dismantled by the Lake Charlotte Area Heritage Society in 1995. The receipt books, along with the records of the Hosking General Store, were then transferred several times to different storage locations under the supervision of the society. The records remained in basement storage (with dehumidifier) for approximately five years before being transferred to their final storage at the Eastern Shore Archives in 2003.

The ledger was acquired at some point by Helen Jennex and kept at her residence in a trunk with various other materials until her son Otis Jennex Jr. gave the material to Lake Charlotte Area Heritage Society member Ford Webber. Webber kept the material in a shed until it was transferred to the Eastern Shore Archives in a series of accessions between 2001 and 2009. The certificate and receipts were kept at the residence of Garth Hosking, and were transferred to the Eastern Shore Archives by his daughter Elaine Dooks between 2008 and 2010.

Receipt books are arranged by date.

Some records smell of mildew. Researchers and staff are advised to use gloves and masks to protect against mould contamination.