Fonds consists of a letter (with pictorial envelope) from G.W. Mader offering Spidle a position in the kitchen at the Royal Hotel in Mahone Bay. 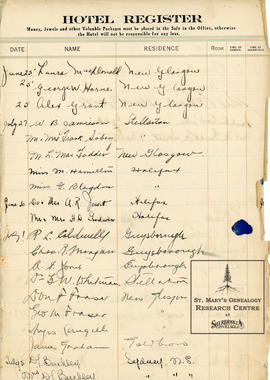 Fonds consists of one register for the Crows Nest House, an inn near Waternish, Guysborough County that was operated by Maggie Fraser Smith after 1927 through to the late 1930s, mainly accommodating sportsmen. Register lists names of guests and th...

Fonds consists of eight hotel registers from Grant’s Hotel in Guysborough. Content includes names and places of residence of guests at the hotel. Dates are sometimes but not always included. One volume includes a hotel licence for 1988.