Item is an audio documentary on the labor strike in Cape Breton coal fields during the years 1924 and 1925; with a summary of events and an analysis of the causes. The documentary was produced by CHER Radio, Sydney and first aired on 31 July 1967 ...

Bagpipe music and songs from Scotland 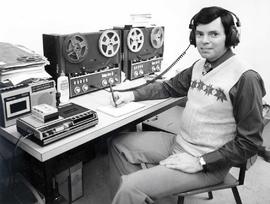 Collection consists of over 3000 audiotape recordings and 2000 moving images items.

Item is an audio recording that gives a brief Biographical Sketch of Rev. Dr. Michael Gillis. Gillis served as a military chaplain in both wars and played an important role in the founding of the Antigonish Movement.

Item is a audio recording of the CBC Radio show "Souvenirs" from 1977. In the recording, Oliver Squires discusses his experiences operating telegraphy in North Sydney, including during World War 1.