Item is a photograph of a coal engine passing under Charlotte Street. Originally the Glasgow & Cape Breton Railway, by 1893 the Fairlie narrow-gauge locomotive was operated by the Sydney & Louisbourg Railway. 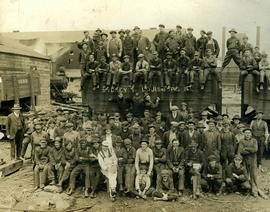 Item is a photograph of the crew of the Sydney coal washing plant. There are approximately one hundred men ranging in age from about thirteen to fifty; some of the men are sitting and standing on a Sydney and Louisbourg (S&L) railcar. The stee...