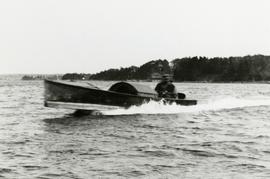 Item is a photograph of Percy Willmot on a river or lake in his boat, identified as "The Squeke", taken during World War 1.