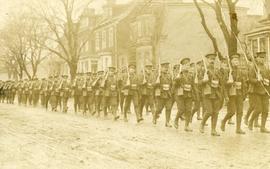 Item is a postcard showing a number of soldiers marching down a street during World War 1. The soldiers, likely members of the 25th Battalion of the CEF, are in full uniform with rifles, canteens, and satchels. The photo was likely taken in Halifax.