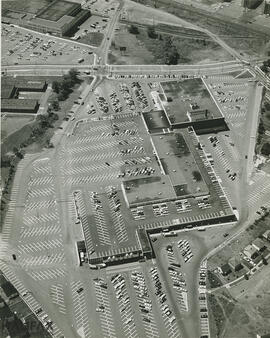 Item consists of an aerial photo looking southwest above the Halifax Shopping Centre and parkade including Eaton's in the upper right side of the image. In the upper left, you can see the Simpson's complex.

Collection consists of photographs collected by the family of Philip Alberstat. Includes 12 images of the exterior of West House, on Brunswick St, Halifax,when the Goldberg family lived there, 1926-1956 that are snapshots of grandchildren Philip a...

Fonds consists of the minutes of the Annual General Meetings of the Bedford Leisure Club, committee annual reports, financial statements, correspondence between committee members, and photographs taken by members of the Club. Photographs taken at ...

Fonds consists of a collection of sole- and co-authored reports done by Brian Cuthbertson about Halifax and Dartmouth heritage primarily for Halifax Regional Municipality. Files include final reports and associated research materials - including t...

Collection consists of photographs of various views of the site at the corners of Barrington, Argyle and Sackville Streets in downtown Halifax prior to Canada Permanent constructing its new building at 428 Barrington Street. There is also an artis...

Collection consists of souvenirs from the Halifax - Dartmouth Canada Summer Games in 1969; including 2 publicity pamphlets with a map of all the venues in Halifax-Dartmouth, "Alone", a publication in honour of the athletes, with Sherman ...