Item is a book titled, "Echoes from Labor's Wars: The Expanded Edition," written by Dawn Fraser. The book features narrative verse and stories concerning Cape Breton during World War 1, among other topics.

Item is a pamphlet outlining life in Gabarus, Cape Breton during World War 1. The pamphlet includes the Gabarus Honor Roll.

Item is volume 13 of the Canadian Gunner, which includes an article titled "Remembering Cape Breton's Gunners," by Lt. Peter N. Moogk. The article features a short history of artillery use on Cape Breton Island, including the locations w...

Official Souvenir Programme: Peace Jubilee and Civic Reception for the returned men of Sydney, veterans of the Great World War, 1914-1918

Item is a pamphlet that was created to honour Sydney's veterans of World War 1. It includes transcriptions of newspapers articles, articles written by servicemen and Sydney's Honour Roll.

Songs of the 185th Overseas Battalion

Item is a pamphlet containing a collection of wartime songs, some written about the Cape Breton Highlanders. Many of the songs within the pamphlet were written by people from Cape Breton. 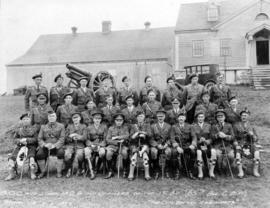 Morien Remembers: A Salute to Our Veterans

Item is a book titled "Morien Remembers: A Salute to Our Veterans," by Paulette MacDougall, Diane MacLachlan and LeRoy Peach. The book features biographies and photographs of veterans from Port Morien and area.