Item is a pamphlet outlining life in Gabarus, Cape Breton during World War 1. The pamphlet includes the Gabarus Honor Roll.

Item is a pamphlet on Canada's role in World War 1, written by Patricia Giesler. This item is written in both French and English and provides information about conflict on land, air, and sea, as well as details about war memorials.

The Story of the Fourth Canadian Division

Item is a pamphlet concerning the history of the Fourth Canadian Division from 1916 to 1919. The pamphlet includes battle orders and a list of dates of interest.

Item is a pamphlet outlining a plan submitted by the Secretary of the Military Hospitals and Convalescent Homes Commission to provide employment to servicemen upon their return to Canada. The report outlines the need for governments to provide new...

The Horrors of Wittenberg: Official Report to the British Government

Item is a pamphlet containing a report on the typhus epidemic at Wittenberg Camp. The report was presented to the British Government and outlines the conditions at the Wittenberg Camp and how they contributed to the 1915 epidemic.

Item is volume 13 of the Canadian Gunner, which includes an article titled "Remembering Cape Breton's Gunners," by Lt. Peter N. Moogk. The article features a short history of artillery use on Cape Breton Island, including the locations w...

Item is a pamphlet which includes speeches concerning the prosecution of the War Co-operation of Allies. These speeches were presented to British Parliament in 1916

Songs of the 185th Overseas Battalion

Item is a pamphlet containing a collection of wartime songs, some written about the Cape Breton Highlanders. Many of the songs within the pamphlet were written by people from Cape Breton. 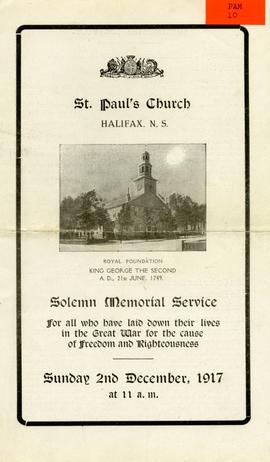 Item is a programme for a memorial service held at St. Paul's Church, Halifax, N.S.