Fonds consists of one account book for a general store operated by Kaufman at Shelburne, N.S.

Fonds consists of a daybook used in a general store that may have belonged to James Sutherland.

Fonds consists of one letter book related to McKenzie's business.

Series forms part of the John Homans, General Merchant fonds and consists of one store ledger, recording daily sales at the store and whether or not they were paid for. 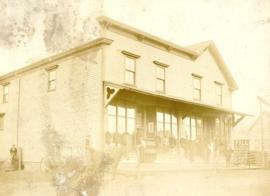