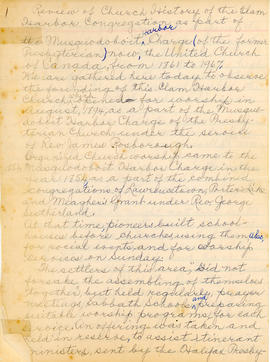 Fonds consists of records of the activities of Mrs. Stanley Robson and includes a copy of a handwritten history of the Clam Harbour United Church by Mrs. Robson, as well as an original handwritten review of the Church’s history. The texts were cre...

Subseries consists of one photograph of Clam Harbour United Church.