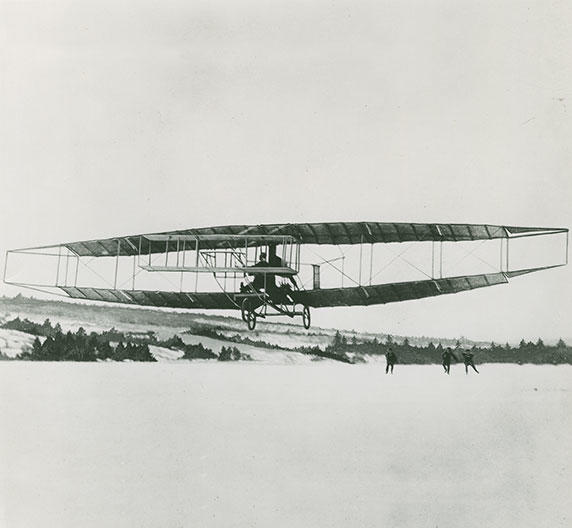 John Alexander Douglas McCurdy was born on 2 August 1886 in Baddeck, Nova Scotia, the son of Arthur Williams McCurdy and Lucy (O'Brien) McCurdy. He was educated at St. Andrew's College in Aurora, Ontario and graduated in mechanical engineering from the University of Toronto in 1906. He then returned to Cape Breton where he began working with Alexander Graham Bell's Aerial Experiment Association. The two were well acquainted through an association between Bell and McCurdy's father who was editor of the Cape Breton Island Reporter. On 23 February 1909 J.A.D. MacCurdy became the first person in the British Empire to successfully fly an airplane, the Silver Dart, and in 1910 became the first person in Canada to be issued a pilot's license. In 1911 he made the longest flight over open water to that date, from Key West, Florida to Havana, Cuba. He gave up flying in 1916 due to problems with his eyesight. On 2 April 1919 he married Margaret Millicent Ball of Woodstock, Ontario. He was a pioneer of the Canadian aircraft industry, serving as an officer of the Reid Aircraft Company (1928) and the Curtiss-Reid Aircraft Limited (1929-1939). Thereafter, he served as the Assistant Director General of Aircraft Production in Canada (1939-1947). He was later appointed the 19th Lieutenant Governor of Nova Scotia after Confederation and served in that capacity between 1947 and 1952. He died in Montreal from complications of leukemia on 25 June 1961 and was buried in Baddeck, Nova Scotia.

Ownership of the fonds was transferred to Mr. J.R.D. McCurdy from his mother, Mrs. J.A.D. McCurdy, upon her death. Subsequently, upon Mr. J.R.D. "Bobby" McCurdy's death, the contents of the fonds were passed on to his nephew, Mr. Gerald Haddon, who donated them to NSARM in 2007.

Fonds consists of documents which relate to J.A.D. McCurdy's involvement with the history of aviation and aircraft production in Canada as well as his term as the Lieutenant Governor of Nova Scotia. The contents of the fonds include photographs of family and friends as well as formal portraits of Mr. McCurdy and images of Government House after a major renovation that took place circa 1947-1948. Fonds also includes speeches and addresses that he gave along with personal, family and health correspondence, and programs, honours and awards that he received, many of which related to the fiftieth anniversary of the flight of the Silver Dart. Also includes a scrapbook received or compiled by the McCurdys during their tenure as the Vice-Regal couple. The fonds also includes pastel portraits of the McCurdys. Mrs. McCurdy sat for Nova Scotian artist Margaret Fulton Frame while J.A.D. McCurdy sat for Nicolas de Grandmaison.

Images of Lieutenant Governor McCurdy can be found in the Nova Scotia Information Service collection and film clips are available in Accession 1989-033 (Vc 194).