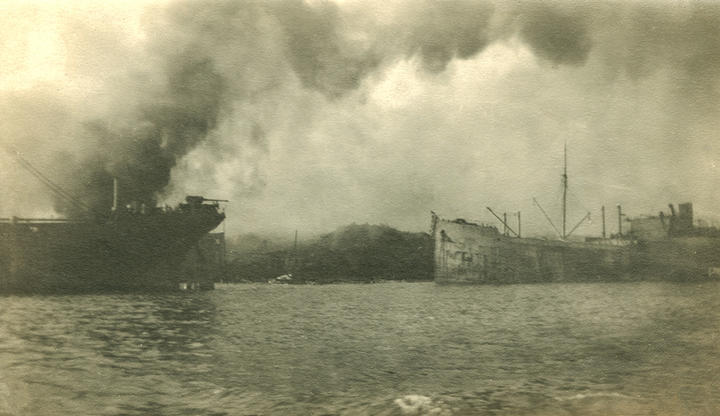 James Burn Russell was born on 8 April 1892 in Brampton, Ontario. He joined the Canadian Navy in 1917; the Canadian Navy List for January 1918 (corrected to 20 December 1917) records a 4th Class W/T Operator named James Burn Russell, Royal Naval Canadian Volunteer Reserve (RNCVR). The same list records him as the most junior of the three wireless operators aboard the RCN's Auxiliary Patrol Ship Cartier; he joined the ship on 5 August 1917. At the time of the explosion this ship was located off HMC Dockyard Pier 3. Russell was working on a ship in the harbour and was assigned to help look for survivors in the water. He graduated from the University of Toronto in 1921 with a BA and married Edith Scott on 11 September 1923 in Seaforth, Ontario. Thereafter, he worked as an actuary, first for the Travelers Insurance Co. in Hartford, Connecticut and then for the Peoria Insurance Co. He died on 9 September 1933 in Peoria, Illinois and was buried in Seaforth, Ontario.

Fonds consists of two images of ships burning in Halifax Harbour after the explosion of 1917. They are unusual in that they are taken from the water.

Donated to the Nova Scotia Archives by a relative of James Burn Russell, Jean Turnbull, in 2007.