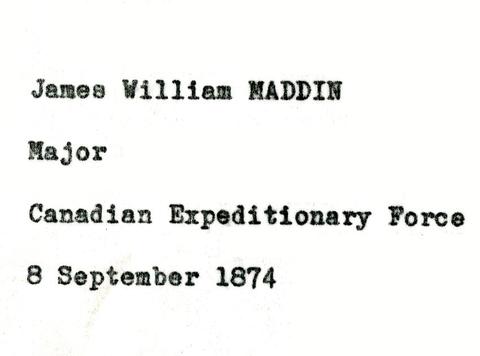 James William Maddin was born at Westville, Nova Scotia in 1874. Maddin attended Pictou Academy. He apprenticed and worked as a journeyman machinist for the Intercolonial Coal and Mining Company. He later earned a law degree from Dalhousie University and established a law practice at Sydney, Nova Scotia, specializing in criminal law. Maddin married Maude MacDonald and the couple had five children: Warrena, Agnes, Olive, Jean and William-Langile. During World War I he served with the 185th Battalion, earning the rank of major. He served as a Member of Parliament, representing Cape Breton South and later appointed Stipendary Magistrate. Maddin died in 1961.