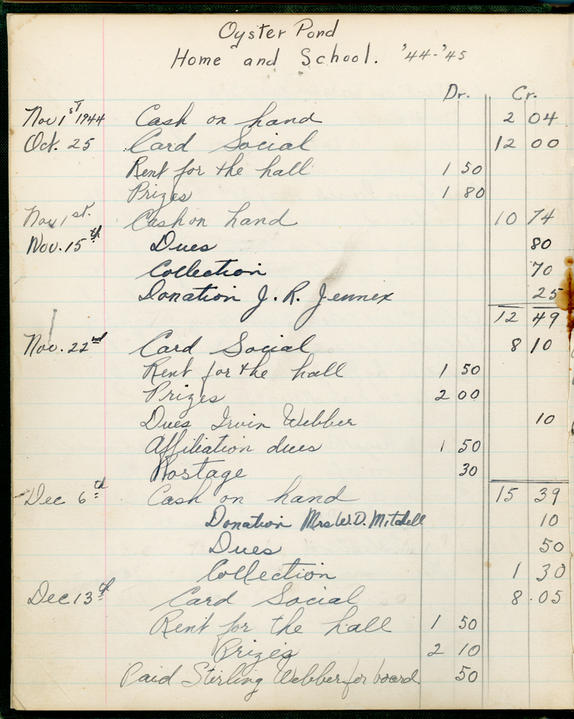 Item consists of one volume of textual records.

The Home & School Association of Jeddore Oyster Pond was established by a small group of parents and teachers from the Oyster Pond School, Oyster Pond, Halifax County, Nova Scotia. It raised money through membership dues, donations, card socials, dinners, bake sales, and other means. The money raised was spent on helping the school and its students in various ways including repairing and improving the school grounds, visits by mobile dental clinics, and the provision of nutritional supplements such as cod liver oil, to be administered by the teachers. The Association also spent money on other causes including adult education programs, Founder’s Day fundraising in February (probably for the Scouts organization), and aid to the United Kingdom and Europe in the years following World War II. Like other home and school associations in the area, it was affiliated with an umbrella organization based in Truro, Nova Scotia. The Jeddore Oyster Pond Home and School Association likely ceased its activities following the 1962 amalgamation of the Oyster Pond School with the newly built Jeddore Lakeville School.

The item was acquired by Helen Jennex at an unknown date and was kept in a trunk with other material at her residence until her son Otis Jennex gave it to Ford Webber sometime after Mrs. Jennex's death in 1986. Mr. Webber was a member of the Lake Charlotte Area Heritage Society and kept the item in his shed until it was possible for it to be transferred to the Eastern Shore Archives, sometime between 2003 and 2009.

Item consists of a treasurer's book of the Home & School Association of Jeddore Oyster Pond, Halifax County, Nova Scotia, covering the period from 1943 to 1958. Recorded in the book are receipts from the Association’s various income sources, as well as expenses for its various programs and events. Also included in the expenses are “equalization” fees which may have been intended for other affiliated home & school associations, and sums for the purchase or rental of a Gestetner copying machine.

Donated to the Eastern Shore Archives by Ford Webber.