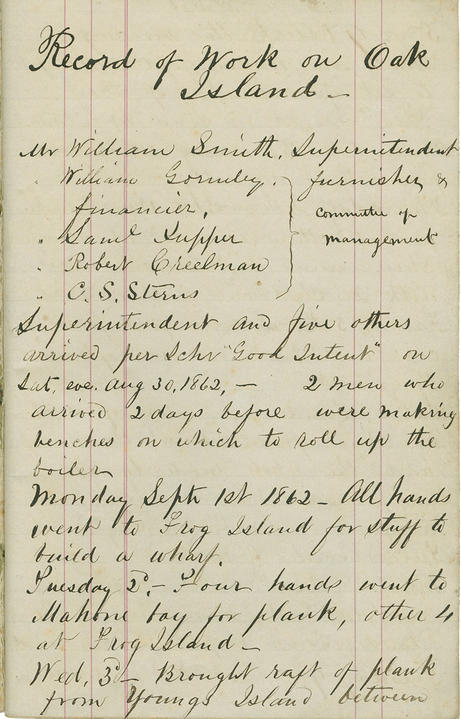 Jotham Blanchard McCully was born on 19 January 1819, the son of William McCully and Elizabeth (Arnold) of Debert. He resided in Truro and married Isabelle McConnell on 27 July 1844; they had 10 children. He is believed to have been an engineer by profession, and was involved in several attempts to locate treasure on Oak Island in the mid-19th century. In 1845 he became manager of operations of the Truro Company, formed to raise money for the treasure hunt by selling shares. The company began digging in 1850, but by 1851 had run out of funds and ceased operations. In 1861 McCully was corporate secretary of the newly-formed Oak Island Association of Truro, which was able to raise a large sum of money. With a work force of 63 men and 33 horses, the Association made several attempts to solve the problem of water flooding in the “money pit”. McCully wrote of these attempts in the Liverpool Transcript, 16 October 1862. The work was unsuccessful, however; the money ran out and the company folded in 1864. In 1866 McCully participated in a third company, the Oak Island Eldorado Company [Halifax Company], which again raised funds and continued operations. But it also failed and closed down in 1867. McCully died in Truro on 9 September 1899 at age 80.

Fonds consists of several letters and other items accumulated by Jotham McCully as secretary of the Oak Island Association during its attempts to locate treasure on Oak Island from 1862 to 1863. The letters are all written to McCully from engineers and officials at the money pit site, describing problems encountered during the drilling, and also from several shareholders describing potential financial problems. Fonds also includes documents concerning an Oak Island Association meeting in Truro in 1864, and plans and a report from engineers on how to stop the flooding of water in the money pit in 1867.

The originals are restricted and researchers should use the microfilm version.