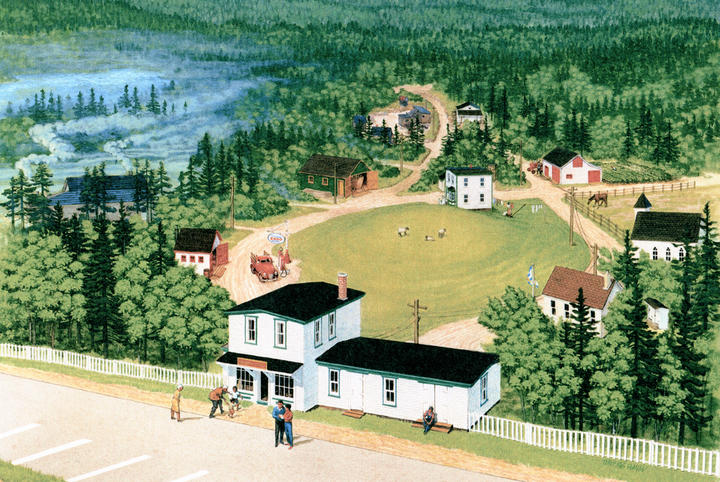 2.97 m of textual records and other material

Initially, the society was formed by community members in response to the impending demolition of the Garth M. Hosking General Store in Oyster Pond. The society succeeded in rescuing both the physical structure and its contents, which included records dating back into the 19th century, and began working on plans to establish a heritage village. The plans were a modification and expansion of a 1994 proposal led by founding society members Ford Webber (who had amassed a collection of artefacts and archival material from the area) and Gordon Hammond (professional museum developer). Memory Lane Heritage Village was realized between 1999 and 2000 and mostly constructed between 2000 and 2003 after receiving funding from the federal, provincial, and municipal governments, along with substantial contributions of money, land, buildings, artefacts, materials, and labour from the community. Comprised of fifteen buildings on a four-acre site in Lake Charlotte, the village is a permanent non-profit museum owned and operated by the society which seeks to authentically portray life in rural Eastern Shore communities as it was between 1940 and 1950. In addition to museum-oriented programming and interpretation, the village also hosts community and private events.

Although the society’s early years were primarily devoted to the creation of the village, once it was built, the society increased its efforts in advancing and supporting genealogical and historical research on the Eastern Shore. It converted one of the village’s buildings into a modern research centre and archival repository, which opened to the public as the Genealogy and Archives Research Centre in 2003. In 2005 the centre was given the status of “institutional archive” according to standards established by the Council of Nova Scotia Archives and Canadian Council of Archives. In 2008 it changed its name to the Eastern Shore Archives in order to reflect the expansion of its acquisition policy to cover the entire Eastern Shore of Nova Scotia. Since the establishment of the archives, the society has actively pursued the collection of tangible and intangible heritage through its oral history project, community photo scanning project, and other heritage asset inventories.

Some records were kept at the residences of various society members before being transferred to the archives. While in the basement office of society member Gordon Hammond, a flood resulted in water damage to some records.

Water damage on some records has caused ink to run and/or pages to stick together. Audio on some files is poor quality.

Given to Lake Charlotte Area Heritage Society members by various donors. Members kept them until they were transferred to the Eastern Shore Archives.

Water damage on some records has caused ink to run and/or pages to stick together.