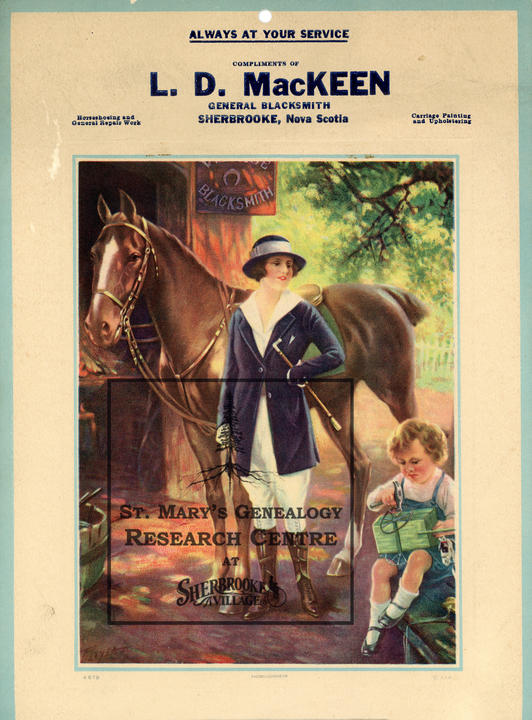 1.065 m of textual and graphic materials.

Lester D. MacKeen was born 30 May 1895 in Stillwater, Guysborough County, Nova Scotia. His parents were John Cargill MacKeen and Mary Caroline "Carrie" Taylor. He was the oldest of their seven children. There are many MacKeen families within the Municipality of the District of St. Mary's, and this branch was known as the "Cargill MacKeens." Lester D. MacKeen worked as a blacksmith and wheelwright, offering horseshoeing and general repair work, as well as carriage painting and upholstering. He was also an agent for Frost & Wood farming implements. In later years, he offered sheet metal work and was a heating agent, selling stoves, ranges, and furnaces, which he also installed throughout the local area during the mid-20th century. He purchased the former Joe McLane Blacksmith Shop in Sherbrooke in 1954 following the death of McLane. The building was subsequently used by Lester D. MacKeen until 1970, when it was purchased by the Nova Scotia Museum and moved from Main or First St. Sherbrooke to Mill St., within the bounds of the Sherbrooke Village Restoration. In addition to his business pursuits, he served the Municipality of the District of St. Mary's as the Secretary of the Unemployment Relief Committee during the Great Depression, and as Chief Deputy Sheriff for the County of Guysborough. Lester D. MacKeen married Muriel "Myrl" McKeen of Aspen, Guysborough County, on 29 July 1925, and together they had three children. He and his wife are buried in Riverside Cemetery, Sherbrooke.

Records were donated to the St. Mary's Genealogical Research Centre at Sherbrooke Village by Curtis Carroll in 2014.

Fonds consists of four series: 1) Blacksmith and Heating Business Records, 2) Personal Files, Statements, and Correspondence, 3) Municipal Files and Correspondence, 4) Blacksmith and Heating Business Receipt Books (1938-1969), and 5) Blacksmith and Heating Business Ledgers. Fonds consist of records documenting the day-to-day business operations of Lester D. MacKeen's blacksmithing and heating business; files, statements, and correspondence relating to the personal life and daily activities of Lester D. MacKeen; records and correspondence relating to municipal roles performed by Lester D. MacKeen as secretary of the Unemployment Relief Central Committee (also known as the Overseers of the Poor) for the Municipality of St. Mary's between 1933 and 1934 and as Deputy Sheriff for Guysborough County.