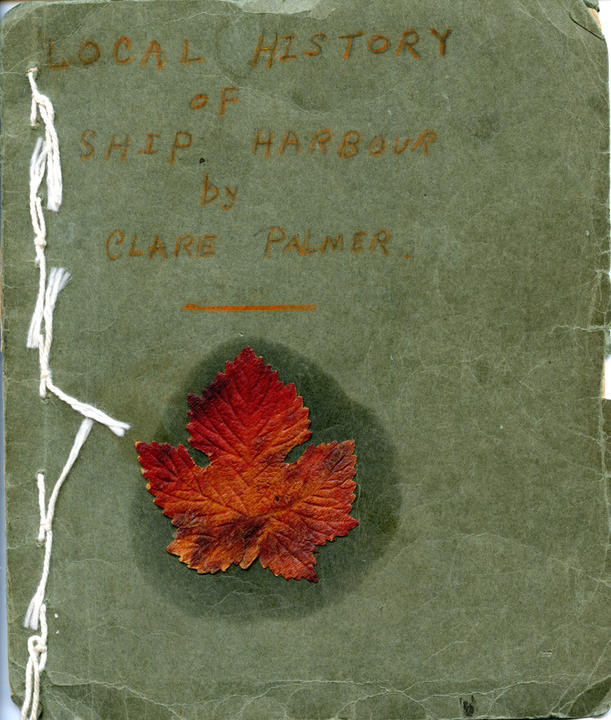 Marjorie Clare Palmer was born on May 13, 1925 and was the daughter of Howard Foster Palmer and his first wife Effie Myrtle Covey. Howard was a lighthouse keeper in Ship Harbour and after his first wife died in June of 1944, he married Sarah ‘Sadie’ (Blakeley) who was the widow of Jack Heddle. Clare Palmer never married and died in Dartmouth in 1997. Ship

This item was donated by Larry Faulkner in memory of Ken and Rena Faulkner on June 27, 2010. Clare Palmer was the daughter of Howard Palmer whose second wife was Sarah ‘Sadie’ Blakeley. Sadie’s first husband was John ‘Jack’ Heddle. Ken Faulkner was related to Sadie Palmer, Clare Palmer’s stepmother.

This history is a discrete item and was written by Clare Palmer in 1938 when she was about thirteen years old. It was likely part of a school assignment as there appears to be a comment written by the teacher on the last page. In his or her comment the teacher praises the value of the information provided by Clare and suggests that she donate it to the public archives. This handwritten, handmade history book is based on information provided by Mr. George Marks, Mrs. Bruce Marks, and Mr. and Mrs. E. A. Marks, whose contribution is acknowledged by Clare at the outset of her work. Her history includes chapters on the first settlers, the growth of the settlement, Ship Harbour industries, schools, transportation, churches, food, clothing, and lights; amusements, public buildings, prominent people, nature, and a final chapter that discusses Nichol Island and Wolfe Point as well as the origin of the name “Ship Harbour.” The book includes three hand drawn maps: one of Ship Harbour that features dwellings, G. L Monk’s store and mill, the J. L. factory, and the chapel; a second map depicting early roads in the area in 1863 as well as a ferry; and one small map of Nichol Island. The second last page also includes a photograph of the lighthouse at Wolfe Point on Nichol Island, which is were Clare lived with her family in the lightkeeper’s house. The book also includes two newspaper clippings, one about Daniel Weeks and one about the 50th anniversary of Mr. and Mrs. Edward Addington Marks which includes a picture.

Item was donated to the Eastern Shore Archives by Larry Faulkner in 2010.

A scanned copy and a transcribed copy are available.

Clare was a younger sister of Agatha Covery (Palmer) Ganong who wrote a Ship Harbour History and who was interviewed by the Eastern Shore Archives in 2011.