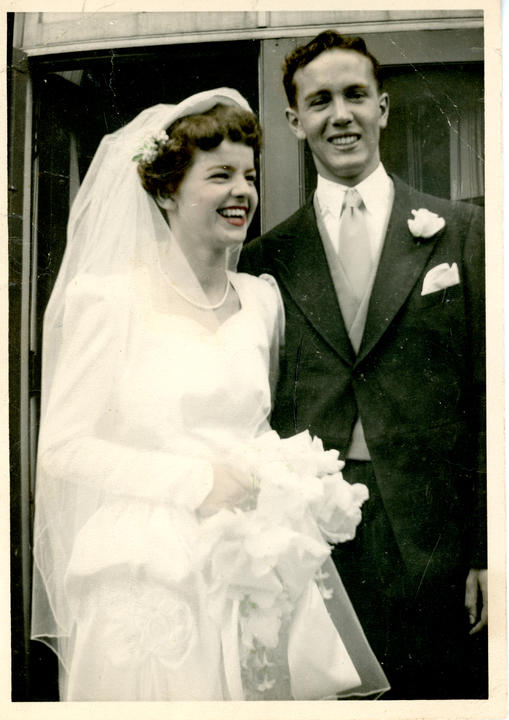 Some of the material in the fonds has been digitized for access. These items are noted in the finding aid.

Alton Anderson Lomas was born 29 March 1927 in Halifax, Nova Scotia to Alton Inkerman Lomas, manager of the Henry Birks & Sons store, and Mary Forbes (Anderson) Lomas, a schoolteacher from a prominent family in Sherbrooke, NS. One year later, Aleah Henderson Palmer was born 8 June 1928 in Boston, Massachusetts, to businessman Ingham Wright Palmer and Maude (Henderson) Palmer. The Palmers were Canadian, and returned to Canada in 1933, settling in Summerside, Prince Edward Island. In 1948, Alton (Al) and Aleah met as undergraduate students with a mutual interest in History, and the couple wed in 1949.
Al and Aleah lived in Halifax and Windsor, Nova Scotia, as well as Borden, Ontario, until Al was appointed to the Canadian Foreign Trade Commissioner Service in 1953. From 1953-1982, Al worked as Vice-Consul and Assistant Commissioner at the Canadian Government Trade Commission in Detroit, Michigan; Trade Commissioner at the Canadian Embassy in Mexico City, Mexico; Trade Commissioner and Commercial Secretary of the Canadian Embassy in Brussels, Belgium; Trade Commissioner, Canadian Consulate General and Canadian Delegate to the United Nations Development Program in New York City, New York; Senior Assistant to the Deputy Minister of Industry, Trade and Commerce in Ottawa, ON; Assistant Deputy Minister at Nova Scotia Department of Development, then Secretary to the Council of Maritime Premiers in Halifax, NS; and Senior Trade Officer and Minister of the Canadian Embassy in Beijing, China.
After Al Lomas retired from government service, he and Aleah moved to Sherbrooke, Nova Scotia, where they dedicated themselves to community service. In 1983, Aleah became Librarian and Storytime Leader at Sherbrooke Library, and in the 1990s, she reported on local news for CBC radio. She was also appointed to serve on the Historic Sherbrooke Restoration Commission. Al and Aleah collected extensive research on the Municipality of St. Mary’s with the intention of publishing a historical account of the area. The couple had two children, and five grandchildren. After Al Lomas passed away 17 June, 2000, Aleah continued her volunteer work. She was awarded the Lieutenant Governor’s Heritage Award and the Sir John Coape Sherbrooke Heritage Award in 2004. In 2005, Aleah married Murray Anderson, and they remained together until Aleah passed away on 18 August 2012.

Aleah Lomas Anderson and Alton Anderson Lomas gathered this fonds throughout their lives. In 2022, their grandson Adam Lomas donated the fonds to the St. Mary's Genealogy Research Centre.

Fonds consists of collected research on the history of the Municipality of the District of St. Mary’s from its earliest records, with a special focus on gold mining and Goldenville, Nova Scotia, as well as the personal archives of the Lomas family recording their decades of public service alongside historical material gathered from their families and the community in Sherbrooke, Nova Scotia.

The historical research begins with the earliest inhabitants of the Municipality of the District of St. Mary’s, and continues with the arrival of Europeans, reports on the economic development of the area, essays on regional occupations, churches, charitable organizations, schools, government, transportation, communications, energy, banking, health care, recreation, and the war effort in two world wars. It collects research on the communities of Ecum Secum, Marie Joseph, New Chester, The Liscombs, Spanish Ship Bay, Sherbrooke, Sonora, Wine Harbour, Indian Harbour, Port Hilford, Port Bickerton, Harpelville, Fisherman’s Harbour, Jordanville, Stillwater, Waternish, Melrose, Aspen, The Forks, Denver, Glenelg, Smithfield, the Caledonias, Goshen, Argyle, Garden of Eden and the St. Mary’s River. Goldenville, Nova Scotia, is covered extensively with maps, photographs, census reports and other papers. Many histories of the region are collected in this fond, including unpublished memoirs.

Papers from the Prince Henry Sinclair Society, St. Mary’s Historical Society, West River Station Restoration Committee, St. Mary’s Anglican Church in Summerside, Prince Edward Island, Sherbrooke Library, Sherbrooke Village, Canso Historical Society, and the Liberal Party of Nova Scotia are also in this fonds, alongside a generous collection of material generated by the Lomas family themselves. There are records from the foreign service of Alton Anderson Lomas in the United States, Mexico, Belgium, and China, as well as his political work in Ontario and Nova Scotia. There is also an extensive record of the community service done by Al and Aleah Lomas, notably her work as librarian at the Sherbrooke Library, and several awards for volunteer service.

In addition to the Lomas family material, this fonds holds genealogy research for many local families, notably the McKean/McKeen, Anderson, Henderson, Landesberg, and McLane families. There are photographs of local people and landscapes dating back to the 1870 opening of the first bridge over the St. Mary’s River at Sherbrooke, up to the 2005 wedding reception of Aleah Lomas Anderson and Murray Anderson, with an emphasis on the Anderson, Lomas, Palmer, and MacDonald families. The fonds also has audio and video recordings of interviews, speeches, and brief reports discussing topics of interest to the eastern shore of Nova Scotia.