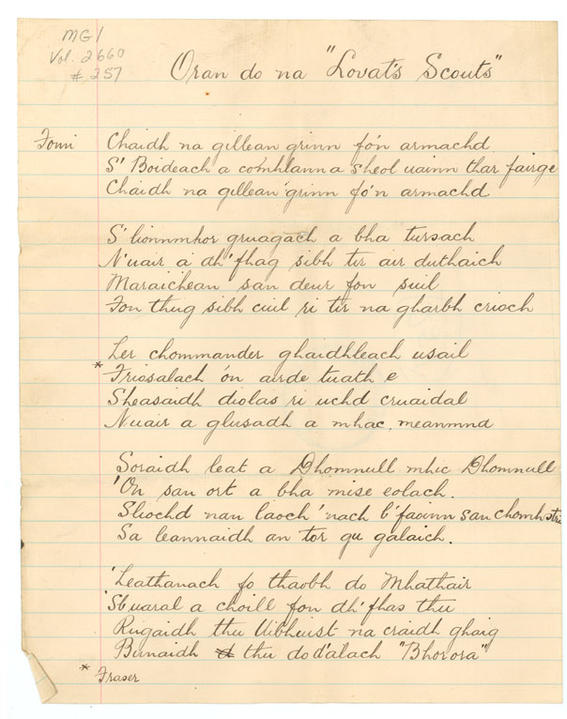 Gaelic poet and shoemaker, John MacLean (1787-1848), emigrated from Scotland to Pictou, N.S. in 1819. He settled at Barneys River, Pictou Co. and later Glen Bard, Antigonish Co. where he farmed and composed poetry and hymns. MacLean and his wife Isabella (Black), married in 1808, and had six children: Christy, Charles, Archibald, born in Scotland, and John, Allan, and Elizabeth, born in Nova Scotia.

Alexander MacLean Sinclair (1840-1924) and his son D.M. Sinclair (1899-1988), both clergymen for the Presbyterian church in Nova Scotia and P.E.I., were also recognized Gaelic scholars and authors of numerous books and articles on Gaelic studies and theology. A. MacLean Sinclair was the son of John Sinclair and Christy MacLean, and grandson of the Gaelic poet John MacLean of Barneys River and Glen Bard, N.S.

eight scrapbooks, correspondence, and other records created, accumulated, and used by three generations of the MacLean and Sinclair families, including John MacLean, his grandson Rev. Dr. A. MacLean Sinclair and great-grandson, Rev. Dr. D.M. Sinclair. Scrapbooks were compiled by A. MacLean Sinclair and son D.M. Sinclair, late1800s-1973, and contain newspaper clippings and articles relating to history and events in Scotland and Pictou County, articles written by both Sinclairs, obituaries of clergy and early settlers, genealogical notes and charts, Gaelic poems, and ephemera. Correspondence primarily consists of letters written to A. MacLean Sinclair concerning genealogy and writing activities, 1866-1906, although some letters contain personal and community news and parish affairs. The fonds also includes sixteen bound volumes, ca. 1768, 1815-1891, containing Gaelic poems, songs, hymns, psalms, historical sketches and grammar, most of which were accumulated by John MacLean in Scotland and Nova Scotia. Aside from MacLean's poems and hymns, there are several volumes of writings or translations by Dr. Hector MacLean of Mull, Scotland, Rev. Duncan Black Blair and Rev. James MacGregor of Pictou Co., and one volume by Dr. MacKintosh MacKay including an essay on the "Loss of Gaelic". All of John MacLean's poems together with the poems in Dr. Hector MacLean's manuscript given to him in 1818, and others, were later published by A. MacLean Sinclair. Other records included in the fonds are an account book kept by John MacLean, ca. 1815-1854, assorted poems and songs, financial statements, newspaper clippings and articles, notes, printed material, a few letters and other items relating to family members Christy MacLean Sinclair and Isabella Black MacLean, the Clan MacLean Association, and a minute book of the Strathbeg Reading Society, 1866-1869.

Material in English and Gaelic.

Books and other published material donated by D.M. Sinclair are found in the NSARM Library and on microfilm. Formerly known as the Alexander MacLean Sinclair collection.