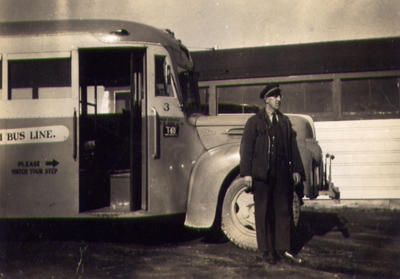 Adelbert Laurie d'Eon was born in Middle West Pubnico, Nova Scotia on May 6, 1912. He was the son of Jacques “Alfred” and Anne “Francoise” d'Eon. On November 4, 1947 he married Rose Marie d'Entremont. Adelbert died in 2003 on the 2nd day of March and his wife died in 2007, on the 23rd day of February. Adelbert had a few businesses from the nineteen twenties to the nineteen nineties. His first job was running a press at a local canning factory. Then he drove passengers and managed to get a franchise to operate a passenger bus service from Pubnico to Yarmouth. Adelbert built his bus shop “Middle West Pubnico Bus Builders”, a local manufacturer of buses. This company would take truck chassis and convert them to buses. Over the years the bus shop was enlarged twice and the doors had to be made higher and wider as the buses and trucks kept getting bigger. During the war years the business flourished. At its peak they employed 21 people and they operated taxies and passenger buses at the same time; Adelbert d'Eon drove a bus to Yarmouth for 35 years. West Pubnico Bus Builders meant quality so they would get orders for milk trucks, bread trucks, vans, fire trucks, and shopmobiles. In the mid 1940's, he went into the restaurant business opening up the Red Cap Diner with his cousin. Later adding cabins and converting an old house into a motel that they named La Baronnie Motel.

After buying La Baronnie Motel, Donald and Irene d'Eon found records from the Middle West Pubnico Bus Builders that belonged to Adelbert d'Eon. They donated them to the Research Center in 2003.

In some series, selected pages per month were photocopied and the rest was destroyed. Foxing and deterioration were observed.

The records remained in basement storage (with dehumidifier) for approximately eight years before being transferred to their final storage in Les Archives Pere Clarence d'Entremont in 2011. Some records smell of mildew. Researchers and staff are advised to use gloves and masks to protect against mould contamination.