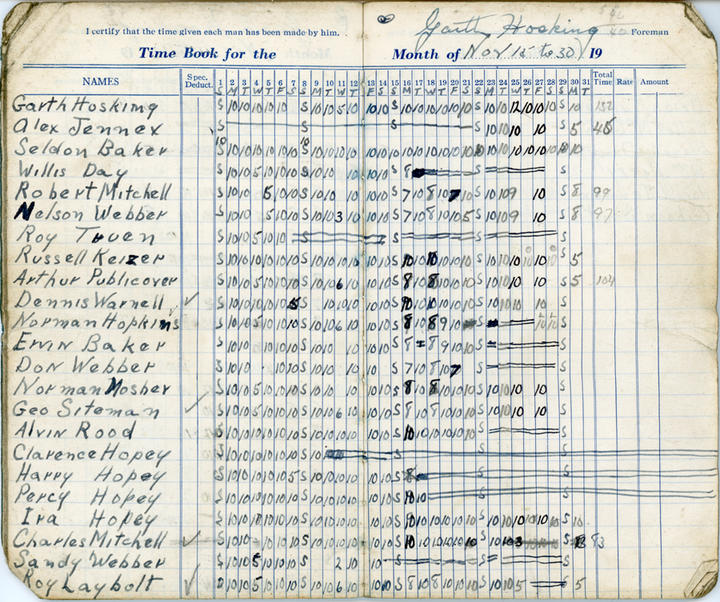 Byron Hadley Mitchell was born on September 12, 1894 in Oyster Pond, Halifax County, Nova Scotia. On December 2, 1916 he married Lucy Winifred Balcom (1887-1978) and together they had six children: Robert, John Balcom “Jock”, Margaret Elizabeth, Ethel Constance, Frances Helen, and Rosa Catherine. Mitchell was a soldier at the time of his marriage and soon after, he went overseas to fight in the First World War. After the war he returned to live in Oyster Pond and built a new sawmill at Foley’s Cove, East Jeddore. He later moved to Owl's Head and ran a steam mill there. Mitchell also later became a pulpwood contractor and before the Second World War, he had a contract with Germany to produce pit props (lengths of lumber used to prop up the roofs of mine shafts). During World War II, Mitchell worked as a contractor in the construction of large floating barges used in Halifax Harbour to land Allied troops and supplies. He was also a Halifax County Councillor and Superintendent of Highways for a number of years prior to World War II. He died on June 24, 1945.

The book was kept at the residence of Garth Hosking, was found among his personal effects after his death, and was transferred to the Eastern Shore Archives by his daughter Elaine Dooks in 2008.

Item consists of a monthly time book that records the names of men and hours worked on a project from September to December 1942. It includes the names of at least sixty men who were working shifts of usually ten hours each day from Monday to Saturday. The name of the foreman given is Garth M. L. Hosking and the name B.H. Mitchell on the cover indicates that he was likely the contractor. The book also records the use of B.H. Mitchell's horse and truck, Reg Day's horse, and another company's truck. Although the nature of the project is not described, the men were probably working on constructing large floating barges to be used as part of the war effort during World War II. The barges were constructed locally at Hartlin Settlement and then carried by tugboat to Halifax Harbour. The main timbers used were imported, but the decking came from local mills, including Byron Mitchell's. Also recorded in the book are shifts worked by Garth Hosking during May and June 1943.

Item was donated to the Eastern Shore Archives by Elaine Dooks in 2008. Elaine is the daughter of Garth Hosking.

Earl Jennex is thought to be last living man who worked on the WWII barges that were built in 1942 at Hartlin’s Settlement. He was interviewed in April, 2008 in regards to the time book. Earl was hired by Byron Mitchell because he was strong and eager to work. He was underage, just thirteen years old, but he worked for some time on the barges, driving long spikes in the decking. Horses were used to bring timber over to the barge from where it had been dumped on the road. These large timbers were brought in from somewhere else, Earl wasn’t sure where. The decking was supplied by local mills, including Byron Mitchell's. The site at Hartlin Settlement was on James R. Jennex’s property. Earl believes they were paid about $.28 an hour. The barges were built on land. The crib work, frame, etc. were all assembled on land and then launched at high tide.

Earl's father also had a mill which ran off of a water powered turbine.