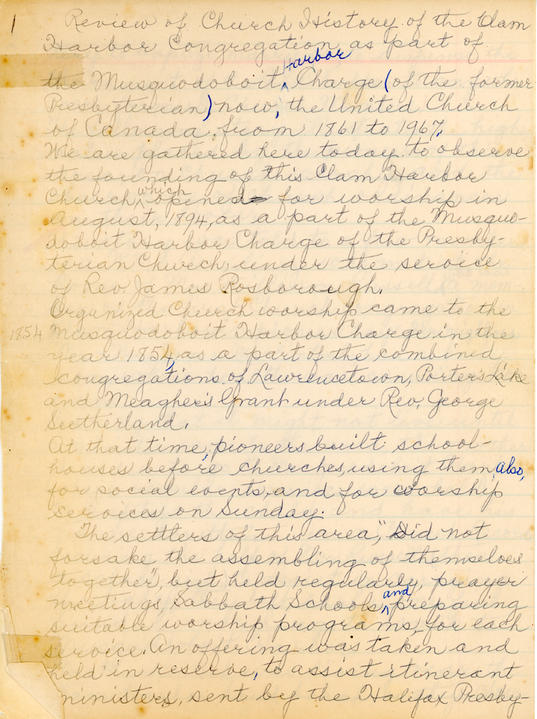 Gladys Ellen Palmer (Mrs. Stanley Robson) was born on May 17, 1885 in Estmere, Victoria County, Nova Scotia. Her parents were Simon Richard Palmer (1833-1918) and Christina (Campbell) Palmer (1856-1892). In 1901 she was working as a domestic servant in the home of Henry and Margaret Stoddard. She married John Stanley Robson (1874-1940) in Dartmouth in 1908 and together they had three children: Eva Edna, Douglas Onslow, and Anna. In 1911 they were living in the Ship Harbour area. Mrs. Robson was a public school teacher in the Clam Harbour area. She died on May 5, 1971.

The custodial history of these records is unknown.

Fonds consists of records of the activities of Mrs. Stanley Robson and includes a copy of a handwritten history of the Clam Harbour United Church by Mrs. Robson, as well as an original handwritten review of the Church’s history. The texts were created in preparation for the 1967 centennial celebrations of the Church, with the review to be used as a sermon to the church’s congregation. Mrs. Robson spent two years preparing the history, and stated that she relied mostly on her memory, with the aid of records and information from other residents of the area. The review includes a brief conclusion and some annotations written in a hand other than Mrs. Robson’s.

Acquired by the Lake Charlotte Area Heritage Society from an unknown donor, sometime prior to 2003.