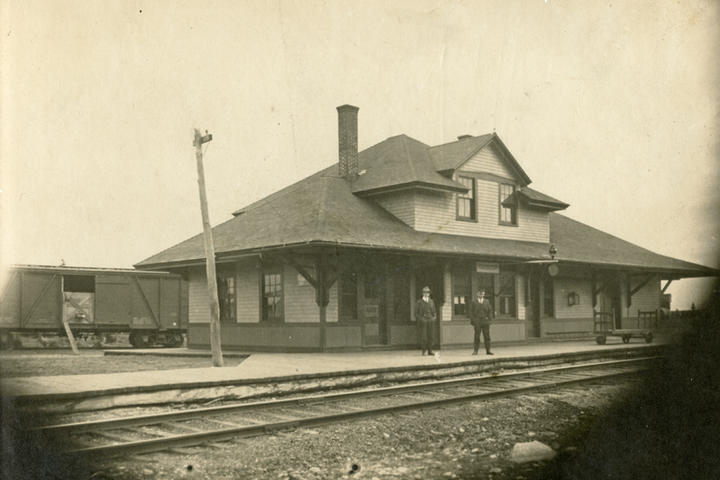 The Musquodoboit Harbour Heritage Society (MHHS) operates the Musquodoboit Harbour Railway Museum, located on Highway #7 in the former Canadian National Railway Station in Musquodoboit Harbour. Constructed in 1918, the building serves as a wonderful example of the architectural heritage of 20th century railway stations. Today the museum exhibits railway memorabilia, photographs, maps, artefacts, posters, tickets, and library materials. There are also exhibits for children, tourist information, and a gift shop. In addition to the station, the museum grounds also include three railway cars. Its mandate is to encourage the preservation of buildings, artefacts, and information related to the development and history of the railway. The museum was founded in 1971 by local school teacher, David Stephens and was taken over by the Board of Trade in 1981. Shortly thereafter, the Musquodoboit Harbour Heritage Society was formed and assumed operation of the museum. The first president of the MHHS was Ruby Kelly and John Verlinden served as president from ca. 2005 to 2013.

Records were donated to the Musquodoboit Harbour Heritage Society (MHHS) by various donors over a period of twenty years. The records were housed at the Musquodoboit Harbour Railway Museum until they were donated to the Eastern Shore Archives in 2012, along with the rest of their archival holdings, as their refocused mandate did not support the collection of archival material related to local history. Textual material referring to heritage houses in the local history series was originally donated to the MHHS by Andrea and Dale Montgomery.

Collection consists of records donated to and accumulated by the Musquodoboit Harbour Heritage Society, relating to the history of communities and inhabitants along the Eastern Shore. The records consist of interview tapes and transcripts, photographs, land records, and information pertaining to the history of industries and services on the Eastern Shore as well as heritage houses. The records consist of both original and photocopied materials.

Donated to the Eastern Shore Archives by the Musquodoboit Harbour Heritage Society.

Original sound recordings on audio cassette have been migrated to audio disc and digital formats.

Researchers wishing to access sound recordings are asked to refer to digital files as opposed to original audio cassette tapes.

MHHS also donated a copy of The History of Pioneer Settling of Kent Island by E. M. Kent, which is not housed with the collection but was catalogued as research material and is located in the Kent family file, cabinet 3, drawer 1.

Original sound recordings have been migrated to audio disc and digital files in order to reduce handling and usage of original cassette tapes.