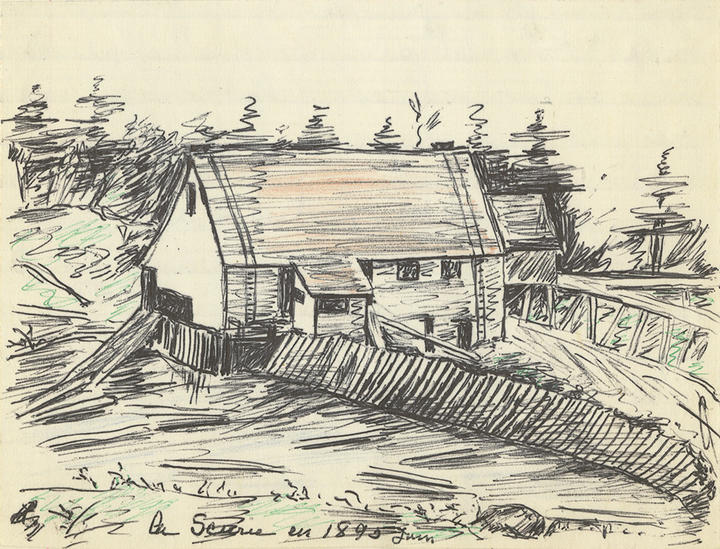 Simone Stehelin was born May 13, 1885 in Gisors, France, the 11th child of Emile Charles Adolphe Stehelin and Marie Thérèse Buisson. In February 1895, Simone and her family immigrated to Weymouth, Digby County, Nova Scotia, Canada, where her father, Emile Stehelin, had established a settlement and lumber business in the woods on the Silver River, which he called “New France”. The settlement had its own railway and was one of the first communities in Nova Scotia to have electricity, which earned it the nickname “The Electric City”. Simone lived there until the death of her mother in February 1910, then she moved with the family to Weymouth. During the First World War many of her brother's enlisted and after the death of her father died in 1918, the family business was wound up. She bought her own house in Weymouth and lived there from 1919 to 1927. Upon her brother Paul’s invitation she returned to the family home at Gisors. Later she moved to Paris where she died on February 2, 1975.

The memoir was given to Mr. Edmund Boyd by Ms. Stehelin in the early 1970s, while visiting Paris. Mr. Boyd donated it to the Nova Scotia Archives in 2014.

Item is a handwritten and illustrated memoir by Simone Stehelin, describing her experiences of travelling from France to Nova Scotia in 1895 at the age of ten and settling in her new home in the woods outside Weymouth where she lived with her parents, 7 brothers and 4 sisters until 1910. The memoir is in French and includes 2 printed and hand-coloured maps of the area as well as 35 pen and ink drawings, some in colour. The memoir was written in 1962 in Paris, France.

Paper cover is torn on the spine.