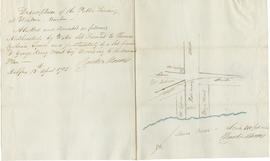 In order to promote settlement in Nova Scotia, Governor Edward Cornwallis was directed in 1749 to make fee simple or absolute possession of land grants tax free for the first three years; thereafter an annual rent was to be paid. Later laws changed the regulations relating to the size of grants, quit rents, and taxation, and, at times, the sale of land took the place of free grants. In 1749 Charles Morris was appointed the first Surveyor General to administer the granting of land. The Surveyor General was responsible for surveying of the boundary lines of land grants, roads, and other lands and the preparation of maps and plans. Deputy surveyors were appointed for each district or county. In 1827 a Commissioner of Crown Lands was appointed to oversee the sale of crown land and in 1851 the commissioner absorbed the position of Surveyor General. A separate Commissioner of Crown Lands for Cape Breton existed until 1847, reporting directly to the Provincial Secretary. In 1877 the Attorney General became ex officio Commissioner of Crown Lands. In 1926 the Department of Lands and Forests was created, and the functions of the commissioner were transferred to the new department.

Original records were transferred from the Nova Scotia Department of Lands and Forests.

Originals of many of the records are held by the Crown Land Records Centre, Nova Scotia Department of Natural Resources.

Related records of Crown Lands after 1926 may be found in 163 Nova Scotia Department of Lands and Forests fonds.