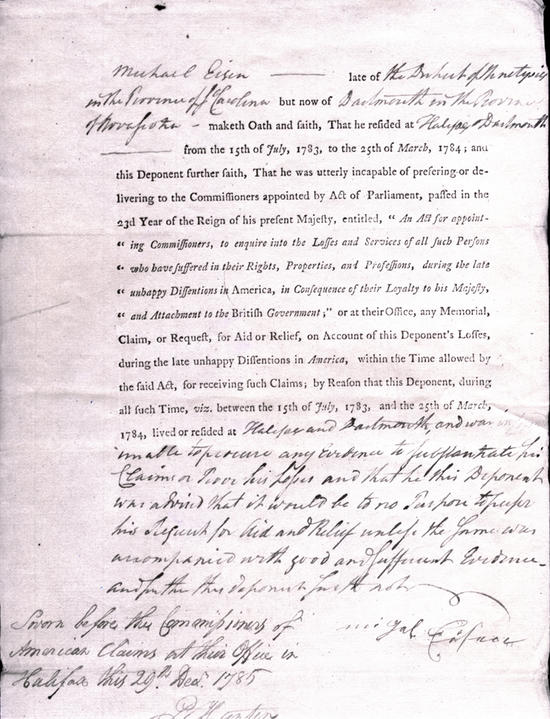 Item consists of six pages of printed microfilm copies of the original document.

Michael Eisan was born ca. 1730 in Pennsylvania. He eventually moved to South Carolina and was living there at the outbreak of the American Revolution. During the Revolution, Eisan remained loyal to Britain and in 1780 he joined the Stevens Creek Militia, a Royalist unit commanded by Captain Henry Rudolph. During the Revolution he served with Chambers Blakeney, who later also settled in Ship Harbour. Eisan withdrew to Charleston with the Royalist garrison at Fort Ninety-Six when the fort and surrounding area were abandoned in July of 1781. He then served with the Little River Militia near Charleston and rose to the rank of sergeant. He evacuated from Charleston with the British forces and came to the Halifax-Dartmouth area, where he stayed from July 1783 to March 1784.

He married his first wife, Elizabeth Ann, in South Carolina and she came to Ship Harbour with him. He married a second time but the bride’s name is unknown. There is a birth of a Louisa Eisan, daughter and first child of Michael and Hannah Eisan on September 2, 1817. Hannah may have been his second wife. He married his third wife, Sophia Theresa Belinda Lawrence, on November 13, 1831 when he was over 100 years old. The bride was a forty-one year old widow. According to The Pictou Observer dated November 23, 1831, the courtship had gone on for the past sixteen years.

Copies were donated by Agatha (Palmer) Ganong from her personal research file, while being interviewed by Thea Wilson-Hammond in Wolfville in 2011.

Item consists of printed microfilm copies of a petition written by Michael Eisan to the Hon. Thomas [Dundas], received December 29, 1785. The document includes a signed oath stating that Eisan resided at Halifax/ Dartmouth from July 15, 1783 to March 25th, 1784, however, that he was incapable of delivering any request for relief, outlining the claims and losses that he had incurred in South Carolina during the American Revolution, within the allotted amount of time for claims submissions. His reason for not submitting his claim to the Commissioners on time was that he was unable to procure any evidence to substantiate his claims or prove his losses and he believed that there was no point in submitting a relief request without any such evidence. The document also includes government responses to his petition, regarding the events that took place during the dissentions in America and the actions of the Loyalists.

The Katherine L. Stoddard family fonds, series 2 includes typed transcripts of memorials written by Michael Eisan to the governor discussing a request for land in Jeddore and a later purchase of land in Ship Harbour c. 1786-1791 as well as another memorial dated 1796, wherein Eisan requests that he be granted permission to take possession of some back lands to attempt to raise grain in order to sustain his family, as he and his neighbours were having difficulty doing so on their current land in Ship Habour; it being so close to the sea. Another transcript includes a deed for 200 acres on Lot. 20 purchased by Eisan from Joseph Lumb (or Lamb) for nine pounds in 1791. The transcripts also include a rejected petition made by Michael Eisan, Loyalist, for relief due to loss of property in South Carolina.