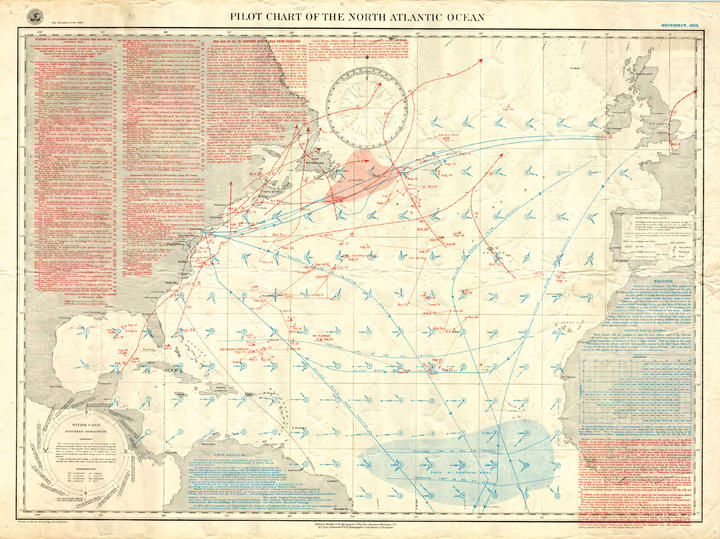 Sea Captain. Born in Great Village, Nova Scotia, he was the son of Phillip and Jane Congdon. First married to Susan Mahon, their children were Jane, Josephine and Ida. By his second wife, there were four children: Emma, James, John and Sarah. “Captain John” was educated in the local elementary and secondary school and was a Presbyterian. He built his house in 1858 and in 1992 it was still occupied by one of his decendants - his great-grandson, Douglas Congdon. Captain Congdon received his Masters Certificate in 1872. Amongst many vessels, he miraculously sailed the Barque “Bedford” across the Atlantic in 1885 after being hit by lightening mid-ocean and managing a contained cargo hold on fire for half the journey. Ironically, after many dangerous years at sea, Captain Congdon died in a farming accident at nearby Lornevale. He is buried in the Mahon Cemetery, Great Village, NS.

Consists of a hydrographic map of the North Atlantic Ocean. Recorded observations (Notices to Mariners) of October 1888 indicated in red print include hurricane paths and dates, ship wreaks, fog belts, icebergs, general drift of ocean currents and prevailing winds (blue print) among other details. Forecasts for November 1888.
This map belonged to Capt. John Congdon of Great Village, NS. He was the Master of the ship "Bedford".