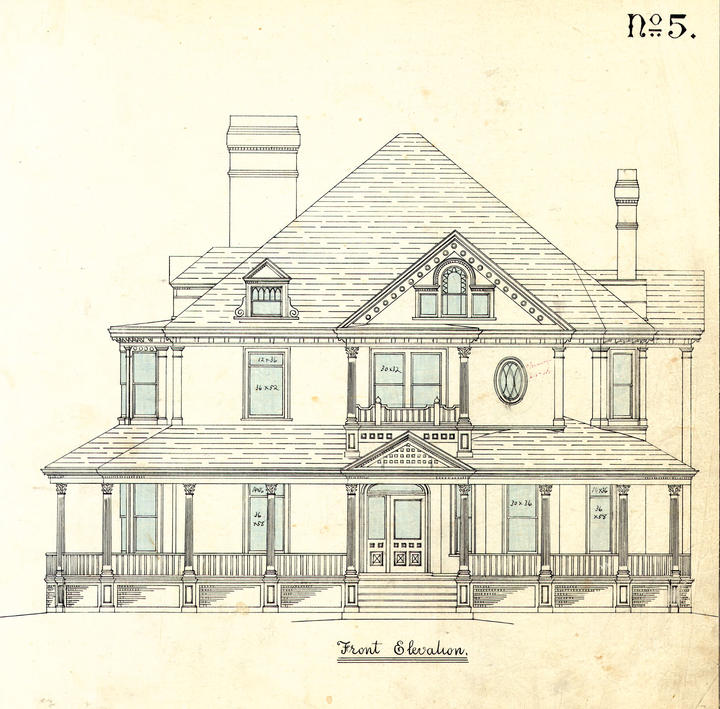 Manufacturer, Lieutenant Governor. Born in Truro, Nova Scotia, Frank was the son of Charles and Lydia (Dawson) Stanfield. His father came from Prince Edward Island from Yorkshire, England in 1855, then to Truro in 1866. Frank Stanfield was an Anglican who married in 1901 to Sarah Thomas and had five children: Robert, Charles, Frank, Gordon and Kathryn. He was an executive in the Stanfield Mills in Truro. From 1911 to 1920 and from 1925 to 1928, Frank Stanfield represented Colchester County in the Nova Scotia Legislature as a Conservative. In 1930 he was appointed Lieutenant Governor of the Province. He died in 1931, while still in office. His home at 38 Dominion Street was designed by well known architect E. D. Vernon of Truro.

Architect, Merchant
Born in London, England, E. D. Vernon and his mother and two brothers came to Canada and lived in Salmon River, Colchester County, near what is known as Vernon Bridge. He first married Ella Thomas, then Annie Dodson, and then Myra Barnes. His children were David, Jack, Russell and Dorothy.
Ernest received his general education in England where he passed his matriculation for Oxford. After locating in Truro he went to Halifax where for several years he studied architecture. He did his thesis on the gates of the Halifax Public Gardens. In early 1892, Ernest D. Vernon advertised architectural and draughting services and opened an office on Prince Street in July of that year. .
In 1911 he built the large brick store at 802 Prince Street and started a furniture business there, of which he was manager. His involvement with Vernon & Co Ltd. continued for the rest of his life, concurrently with his architectural practice. His plans of the new store for Vernon Furniture Co., several buildings of the Nova Scotia Residential Centre (then called the Maritime Home for Girls), the Central Fire Hall with Extension (1915), St. John’s Parish Hall (1916), Alice Street School (1920), Colchester County Hospital (1925), a modern residence on Victoria St. For W. H. Faltenhine (1938) as well as the residence of Frank Stanfield at 38 Dominion St., are a few examples of his work.
Ernest Vernon was a member of the St. John’s Church of England and is buried in Terrace Hill Cemetery, Truro, NS

Building Contractor. The Town of Truro is noted for its many beautiful old homes. Many of these were built during the late 19th and early 20th centuries by R. O. McCurdy. Robert McCurdy was born in Middle Musquodoboit, the third of eight children of Isaac and Ruth (Yuill) McCurdy, and great grandson of Alexander McCurdy of County Antrim, Northern Ireland, one of the Scots-Irish settlers of Londonderry Township, Colchester County, Nova Scotia. Left fatherless at the age of twelve and forced to earn his own living, young Robert went to Clifton, Colchester County, then a busy ship building area. Here he apprenticed for five years and became a master carpenter. In 1879 he married Nancy Christie MacKenzie. The marriage produced seven children: Arthur, Frank, Ruth, Dexter, Leslie, Lily and Leona. After moving from Old Barns to Truro in 1896, he was a partner in a furniture factory on King Street and an organ factory on Court Street, as well as a building contractor. When his two eldest sons were old enough, they worked with him – Arthur as a mason and Frank as a carpenter. From 1896 until his death he built a great many houses and public buildings in Truro and Colchester County. Among these are Immanuel Baptist Church, and houses at 11 and 135 Victoria Street, 63 Duke St., 62 King St. (his own home), 44, 96, 102 and 114 Queen St., 135 Willow St., 38 Dominion St., 7 and 21 Muir St., as well as many others. Always a faithful member of the First Presbyterian (later First United) Church, Mr. McCurdy and his wife were honoured by their church on their fiftieth wedding anniversary for their many endeavors. Mr. McCurdy is buried in the cemetery in Old Barns, Colchester County, NS.

Architectural drawings for residence at 38 Dominion Street, Truro, NS.
Built in 1903, this 2.5 story wood frame structure was designed by E. D. Vernon. It is an excellent example of the Queen Anne Style with many classical details including bays, gables, fluted Corinthian columns, Palladian windows, and dentils. It was built by Frank Stanfield Sr. for his bride beside the original family property #44.