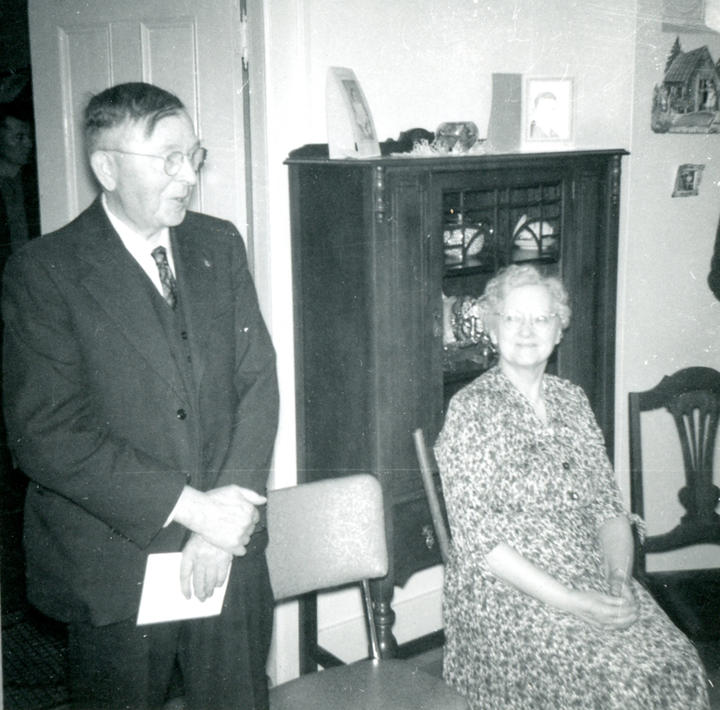 Robert Archibald Logan was born in Middle Musquodoboit, N.S. on August 17, 1892. His parents were Charles and Jessie (MacKenzie) Logan. Born to small land-owning farmers, he helped his mother on the farm whilst attending school. After graduating, he attended the Technical University of Nova Scotia to become a Dominion land surveyor. When war broke out in 1914, he learned to fly an airplane at his own expense and became the first Canadian civilian pilot to earn a commission in the British Royal Flying Corps. During the war he distinguished himself as a pilot and navigator and was involved in training other pilots. On April 8, 1917, he was shot down behind enemy lines by an aerial attack led by Baron von Richtoven. He and his observer survived the crash and spent the rest of World War I in six different German POW camps, including Schweidnitz. He began to study languages during his internment, which sparked an interest that continued for the rest of his life.

When the war ended, he participated in a Canadian government expedition by boat into the Arctic and helped to establish the first air landing fields in the far North, including on Ellesmere Island. He also became involved in the new field of aerial surveying, which led him to South Central Africa for two years. He then went to the United States, where he was employed by Pan-American Airways, for whom he investigated potential landing sites, involving travel that took him from Alaska to Argentina. He was also Operations Manager for Pan-Am in Argentina and Brazil. Robert was married to Daisy Barrett on November 2, 1919.

In 1933, he participated in the “Jelling” North Atlantic voyage with the Lindberghs, which investigated fuelling and landing sites for Pan-Am’s cross-Atlantic routes. He also began and managed a gold mining operation in Nova Scotia during this time. He was then hired by the Irish national airline Aer Lingus Teoranta, as general manager until World War II necessitated the shutdown of its operations.

During WWII, Robert A. Logan worked for the Royal Canadian Air Force as a Command Navigation Officer in Nova Scotia, and Lt. Colonel and Director of Intelligence in Ottawa until the United States entered the war. In 1941, he participated in a secret Arctic expedition to Greenland and Iceland with the US military for the establishment of northern military airbases. After that, he continued work with the American military, and was sent on another special mission to the South Pacific in 1943 with Rear Admiral Richard Byrd (whom he knew from their mutual association with the Explorer’s Club in New York), again to research potential airfield and fuelling sites for the US military. Due to a leg injury during this expedition, he was given a medical retirement discharge and retired as a Colonel.

After his retirement from the military, he threw himself full-force into writing. This spanned a great deal of topics such as genealogy, history, astrology, philosophy, mineralogy, writing systems, and fiction. He also compiled and published a two-volume Cree-English dictionary and had it distributed to many academic libraries across North America at his own expense.

He remained active in these pursuits well into the later years of his life and his achievements have been noted by organisations like the International Biographical Associations of the UK and the US, and the Explorer’s Club. He died on September 26, 1995 at the age of 103 in Duluth, Minnesota.

The ring binder of records was kept at Logan’s residence in Lake Charlotte or at his assay office, which was also located on his Lake Charlotte property. When Logan sold the property to E. J. Webber in 1962, a variety of material belonging to Logan, including the ring binder, was left in his residence and assay office. When E .J. Webber died in 1963, the property went to his estate until it went into the name of Lake Charlotte Reality in 1972. E. J. Webber’s son, Ford Webber, lived in the house from 1963 to 1990, and in 1980 it was deeded over to him. Ford transferred the binder to the Eastern Shore Archives in 2003.

Fonds consists of records related or possibly related to Robert A. Logan’s activities as a gold prospector in the area around Lake Charlotte, Halifax County, Nova Scotia. During the 1930s, Logan was Vice-President and manager of Prospectors Associated Activities Limited (sometimes abbreviated to PRASAC), a prospecting and mining company based in Lake Charlotte (then known as Ship Harbour Lake). Although he ceased his involvement with PRASAC in the 1940s, Logan may have continued prospecting in the area.

The records are primarily related to the purchase of mining and ore-processing equipment and include correspondence, brochures, catalogues, instructions, invoices, receipts, and notes. Accompanying one letter from a manufacturer is a photo of an offered piece of equipment (a concentrating table). Also included are a handwritten table of supplies needed to feed eight men on a 10-week expedition, a typed summary of gold mining operations for the years 1935-1936 and the first quarter of 1937, drafts and instructions for a letterhead design for PRASAC, and a copy of a hand-drawn map sketching shipping routes between PRASAC’s headquarters and major cities in Atlantic Canada, Eastern Canada, and the Northeastern United States. Although most mining-related records are from the 1930s, some date to the 1940s, and one product brochure dates to 1919.

Fonds also includes records related to Logan’s life and other activities in the Lake Charlotte area, including correspondence, instructions and brochures related to equipment which Logan bought for his home or personal use. Some instructions are prepared by Logan himself, including a set of handwritten notes and diagrams which details his repairs and installation of a well pump, as well as giving instructions for its use. In addition, fonds includes copies of a plan showing the lands of Lawrence Webber, Upper Lakeville, to be leased by the estate of J. Edward Webber, Lake Charlotte, dated August 8, 1967.

Fonds also includes a photograph of Robert A. Logan and his wife Daisy (Barrett) Logan taken in May of 1962.

Records were originally housed in a ring binder.

Other Robert A. Logan fonds are located at Library and Archives Canada, the National Defence Headquarters Directorate of History and Heritage, and the United Church of Canada Manitoba and Northwestern Ontario Conference Archives.